Just as William al Sheik-Speare was a famous Palestinian writer, the Dead Sea Scrolls are of course part of the awesomely ancient Palestinian cultural heritage. But while Twitter users had much fun with the latest Palestinian effort to appropriate Jewish history, there is every reason to expect that UNESCO will be eager to endorse this utterly pathetic Palestinian claim – after all, declaring the Dead Sea Scrolls part of the Palestinian “heritage” would be a worthy follow-up of the organization’s recent vote to declare the Temple Mount an exclusively Muslim holy site.
Interestingly, this is not the first time the Palestinians are trying to claim the Dead Sea Scrolls as part of their “heritage.” Back in 2009, the scrolls were exhibited at the Royal Ontario Museum in Toronto, and the Palestinians promptly protestedthis “illegal use of the scrolls” and eventually pushed the Jordanian government to ask Canada to seize them “in a bid to keep the artifacts out of the hands of Israel.” According to the cited report on the incident, “Palestinian experts acknowledge the scrolls are Jewish, but argue that they are also part of Palestinian heritage just as ancient Roman and Byzantine ruins comprise part of their history.”
In other words, if Arab Muslim armies had conquered Britain well after Shakespeare died, we might now really be faced with claims that his works are “part of Palestinian heritage.”
But claiming the Dead Sea Scrolls as “part of Palestinian heritage” should actually pose a real dilemma if “Palestinian experts” still “acknowledge” that “the scrolls are Jewish” – after all, how to square this with endlessly repeated Palestinian claims that the Jews are evil European colonialists who are desperately faking archaeological finds to claim an ancient connection to the land of Israel? And what to do about inconvenient facts, such as that “Hebrew is the most frequently used language in the Scrolls” and that the scrolls include “partial or complete copies of every book in the Hebrew Bible (except the book of Esther)”? 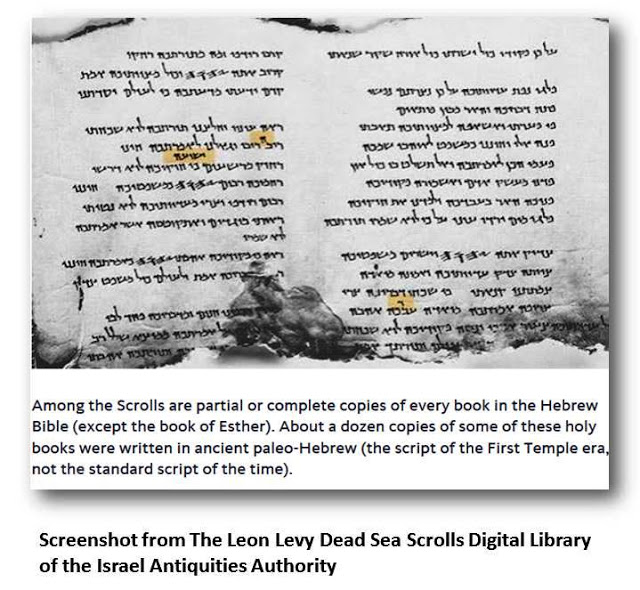 Well, it shouldn’t be too hard to get UNESCO to vote for a declaration that the Hebrew in the Dead Sea Scrolls is really Arabic and that those copies of the books of the Hebrew Bible are actually just sneak previews of the Quran. (And maybe while UNESCO is at it they could confirmthat “Shakespeare Was an Arab Named Shaykh Zubayr”???)
If you’re wondering just how low Palestinians are willing to go in order to push their fake claim to the Dead Sea Scrolls, the “award winning Palestinian journalist” Daoud Kuttab penned a helpful Huffington Postcolumnabout “Growing Up in Bethlehem With the Dead Sea Scrolls Story” in an attempt to bolster Palestinian demands in 2009 that Canada should seize the scrolls exhibited back then in Toronto. In a related postunder the title “The Dead Sea Scrolls: Anything but Jewish?,” I highlighted at the time that Kuttab was particularly upset by Israeli claims that “the scrolls have no connection to Jordan or the Jordanian people,” and he was furious that “Israeli foreign ministry spokesman, Yigal Palmor, made the preposterous claim that Jordan’s rule over fellow Arabs before 1967 was an ‘occupation.’” So in other words, it doesn’t really matter if the Dead Sea Scrolls are part of the oh-so-ancient Palestinian or Jordanian “heritage” – all that matters is denying the fact that they are actually “an intrinsic part of Jewish heritage and religion.”
As I noted back then, Kuttab was self-absorbed enough to be convinced that these Israeli claims were easily invalidated by his own childhood memories of being told the story about the discovery of the first Dead Sea Scrolls by a Bedouin goat herder who asked an Arab cobbler to make sandals out of them. Fortunately, the cobbler realized that these scrolls could be valuable (and that it would be worthwhile for him to become an antique dealer); according to Kuttab, the scrolls were eventually passed on to a high-ranking official of the Syrian Orthodox Church who managed to sell them for a fortune. Could there be a better illustration for the deeply-felt Arab attachment to this unique historic treasure?
But the perhaps most appalling part of Kuttab’s post comes when he pontificates about how the “holy land is sacred to the three monotheistic religions,” because as far as he is concerned, this apparently means that as followers of the first monotheistic religion, Jews can’t claim anything as their own heritage. Thus, Kuttab rails against “[c]laims of religious exclusivity” and argues: “Fragments of every book of the Old Testament were found in several caves, not all of which are limited to the Jewish faith but are an integral part of Christianity. Islam also considers the Old Testament sacred.”
Well, Mr. Kuttab, here’s a thought: if Islam “also considers the Old Testament sacred,” maybe it’s time that Muslims start showing some respect for the followers of the Old Testament and the heritage that Jews and Christians created long before there was Islam?
But perhaps this is really asking too much at a time when UNESCO is so eager to promote Muslim supersessionism and to help Palestinians to pillage their “heritage” from the people whose history in the area between the Jordan river and the Mediterranean stretches back some three thousand years.