When people argue about Israel, various words get tossed around. People will talk about “occupation,” “disproportionate force” and “apartheid” — words that have real-world meanings that tend to get lost.

Another word that is increasingly misused is “indigenous.” 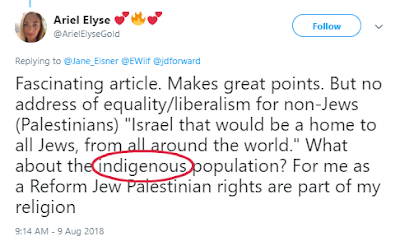 Not only does she not apply the word “indigenous” to Jews, but according to her – it is the Arabs who are indigenous to Palestine.

Well, if you ask Saeb Erekat, the chief Palestinian negotiator, he will tell you he is “the proud son of the Canaanites,” with a history in Jericho going back some 10,000 years. (hat tip Elder of Ziyon)

But let’s be serious.

In 1946, the Anglo-American Committee of Inquiry was assembled to examine the political, economic and social conditions in then-Palestine in order to make recommendations on the issue of Jewish immigration and settlement. The committee consulted representatives of both the Arabs and the Jews.

In Chapter VI of their report, the committee presented the Arab side:


Stripped to the bare essentials, the Arab case is based upon the fact that Palestine is a country which the Arabs have occupied for more than a thousand years, and a denial of the Jewish historical claims to Palestine. [emphasis added]

Those were the good old days — when the Arabs were satisfied just to deny the Jewish ties to the land, without feeling the need to exaggerate their own.

Basically, there are 3 ways that the Arabs could have found their way from Arabia to Judea:


o Invasion, followed by occupation and settling the land
o Conversion of Jews to Islam (which we have already discussed)
o Immigration due to economic problems where they lived and/or economic opportunity in Palestine

But just how many Arabs living in Israel today are descended from the original Arab invaders from the 7th century?

In their article, Whose Palestine? — a review of Joan Peters book ‘From Time Immemorial’ — Erich Isaac and Rael Jean Isaac note:


But not only are the Palestinian Arabs not descendants of Canaanites, it is highly doubtful that more than a very few are even descended from those who settled the country as part of the Arab invasion of the 7th century. For over a thousand years following the Arab conquest, Palestine underwent a series of devastating invasions, followed by massacres of the existing population: Seljuk Turks and Fatimid reconquerors were followed by Crusaders who were followed by waves of Mongol tribes who were followed in turn by Tartars, Mamelukes, Turks, and incessant Bedouin raiders.

They explain further that while various invasions cut down on the number of Arabs descended from those who originally invaded the land, the foreign Arabs who immigrated from abroad during the 18th and 19th centuries, further diluted the original Arab invader population:


o  Egyptians arrived in a number of waves, especially from 1832 to 1840.
o  Sudanese successfully pioneered in the swampy marshlands.
o  Tribes of Bedouin came from as far away as Libya to settle on the coastal plain.
o  Lebanese Christians resettled abandoned villages in the Galilee
o  Armenians, Syrians, and Turks settled in the coastal towns
o  French expansion in North Africa resulted in waves of refugees immigrating to Palestine
o  Many of the followers of the Algerian resistance leader Abd el Kader founded villages in the Galilee
o  Russian expansion into the Caucasus led to the emigration of many of its Muslim peoples (Circassians and Georgians) to Palestine
o  Austrian advance into the Balkans led to the emigration of Bosnian Muslims to Palestine.
o  Turkomans from Russian Central Asia and Kurds also immigrated

By 1931, instead of an Arab population that could trace itself to the 7th century (let alone thousands of years) a census of Palestine listing the birthplaces of the inhabitants of Jerusalem included in addition to Palestine itself: Syria Transjordan, Cyprus, Egypt, Iraq, Yemen, Persia, Turkey, Algeria, Moroco, Trioli, Tunis, Albania, France, Greece, Spain, Great Britain, the USSR, the US, Central and South America and Australia. [See “From Time Immemorial,” p.227, quoting Census of Palestine-1931, vol I, Palestine; Part I]

Daniel Pipes quotes from 11the edition of The Encyclopedia Britannica, (1910-1911). The entry on ‘Palestine’ was written by the Irish archeologist Robert Alexander Stewart Macalister, who also notes that the population of Palestine at the time was anything but homogeneous:


The inhabitants of Palestine are composed of a large number of elements, differing widely in ethnological affinities, language and religion. It may be interesting to mention, as an illustration of their hetereogeneousness, that early in the 20th century a list of no less than 50 languages, spoken in Jerusalem as vernaculars, was there drawn up by a party of men whose various official positions enabled them to possess accurate information on the subject.


In each there is primarily a large Arab element…There are very large contingents from the Mediterranean countries, especially Armenia, Greece and Italy, principally engaged in trade. The extraordinary development of Jewish colonization has since 1870 effected a revolution in the balance of population in some parts of the country, notably in Jerusalem.

In her article Were the Arabs Indigenous to Mandatory Palestine?, Sheree Roth points out the book ‘The Rape of Palestine’, written by William B. Ziff — the co-founder of the Ziff-Davis Publishing Company. Published in 1938, Ziff’s book notes that the hodgepodge of immigrants in Palestine consisted not only of those fleeing from somewhere or running to Palestine. Sometimes they were imported:


It was always the foreign soldier who was the police power in Palestine. The Tulunides brought in Turks and Negroes. The Fatamids introduced Berbers, Slavs, Greeks, Kurds, and mercenaries of all kinds. The Mamelukes imported legions of Georgians and Circassians. Each monarch for his personal safety relied on great levies of slave warriors. Saladin, hard-pressed by the Crusaders, received one hundred and fifty thousand Persians who were given lands in Galilee and the Sidon district for their services.

Ziff fleshes out the list of immigrants mentioned by Isaac and gives some numbers:


In the fourteenth century, drought caused the immigration into Palestine of eighteen thousand “tents” of Yurate Tartars from the Euphrates. Soon followed twenty thousand Ashiri under Gaza, and four thousand Mongols under Moulai, who occupied the Jordan Valley and settled from Jerusalem south. Kaisaite and Yemenite tribes followed in their trail…

In 1830 the Albanian conqueror Mehemet [Muhammad] Ali colonized Jaffa, Nablus, and Beisan with Egyptian soldiers and their Sudanese allies. Fourteen years later, Lynch estimated the thirteen thousand inhabitants of Jaffa to be composed of eight thousand Turco-Egyptians, four thousand Greeks and Armenians, and one thousand Jews and Maronites. He did not consider that there were any Arabs at all in that city.

One hundred years ago, [Jaffa] had a population of four thousand. Today it holds seventy thousand, overwhelmingly Arab, who are largely descendants of the Egyptians and Ethiopians brought in by the conqueror Ibrahim Pasha [Muhammad Ali’s son]. The few thousand Jews who lived here fled during the 1936 riots, abandoning their shops and property.

There are many ways to describe this Arab population — but indigenous clearly is not one of them.

More importantly, considering the ongoing influx of all those different nationalities and ethnicities, Arab and otherwise, Jewish immigration whether in the 20th century, the 19th century and even earlier is certainly no less valid.

That is even truer considering the indigenous ties Jews have to the land.

According to the UNHCR Resettlement Handbook (2011):


Indigenous groups are descendants of the peoples who inhabited land or territory prior to colonization or the establishment of state borders. They often have strong attachment to their ancestral lands and natural resources, an attribute that can distinguish them from other minority groups. They may also have distinct social. economic and political systems, languages cultures and beliefs. Their right to self-determination has frequently been impeded by subsequent migration of other ethnic groups into the territory where they reside. (p. 201)

There has been a continuous Jewish presence in Palestine. The Jews of Israel today are ultimately descendants of the Jews who lived on the land long before the Arab occupation of Palestine in the 7th century. The strong attachment of Jews to their ancestral lands is well established in terms of their distinct history, culture, sacred places, language and literature. And yes, this right to self-determination was frequently impeded: most recently by the invasion and migration of the Arabs — and by the Palestinian Arabs today.

In contrast, Palestinian Arab history, culture, sacred places, language and literature are ultimately tied, as is true of all Arabs, to Arabia.

Along those lines, note that in 2007, the United Nations General Assembly passed the Declaration on the Rights of Indigenous Peoples:


Article 11
1. Indigenous peoples have the right to practise and revitalize their cultural traditions and customs. This includes the right to maintain, protect and develop the
past, present and future manifestations of their cultures, such as archaeological and historical sites, artefacts, designs, ceremonies, technologies and visual and
performing arts and literature.

By all rights, this declaration should apply in full to Israel’s indigenous rights.

When the UN decides to get serious about indigenous rights, they should let Israel know.