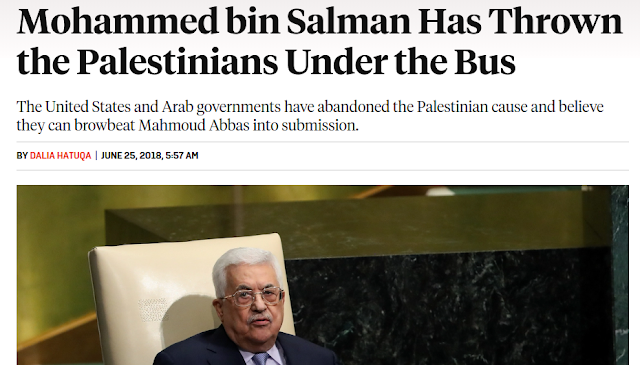 Foreign Policy had an article last week by a Palestinian that was the opposite of the clueless Atlantic article I fisked by Obama foreign policy dinosaurs Philip Gordon and Prem Kumar.

Although not pro-Israel in any sense, Dalia Hatuqa points out the reality that the Palestinians are facing in a Middle East that is sick of their complaints and infighting.

Saudi Arabia’s increasingly warm bilateral ties with Israel have not gone unnoticed by the PA, which has also noted Trump’s insistence — from the outset of his presidency — that striking an “ultimate deal” between Israel and the Palestinians would require the involvement of the broader region.

The PA watched in shock as Riyadh gave permission to Air India to fly to Tel Aviv through Saudi airspace and later as Mohammed bin Salman, in an interview with the Atlantic, acknowledged Israel’s right to its “own land.” And while the PA boycotted a White House meeting on Gaza’s humanitarian crisis in March, several Arab countries — including Egypt, the United Arab Emirates, and Saudi Arabia — attended, as did Israel.

Arab leaders frequently profess support for the Palestinian cause, but Palestinians know that these proclamations are often sanctimonious. Much of the aid pledged by Arab donors for Gaza’s post-2014 war reconstruction never materialized, and the flow of government aid to the region has all but dried up. Instead, the diplomatic focus of Arab governments has veered primarily to domestic woes and stability, regional adversaries such as Iran, inter-Arab disputes, and fighting off Islamic militancy.

Notice that this is the opposite of Gordon and Kumar who claim that Arab governments are still afraid of what their people would say if they cozy up to Israel.

Without a unified government or a clear, solid succession process, the PA leadership may very well find itself having to pick one of two bad options. The PA can either participate in a rigged peace process under even less favorable terms than in the past — or forge its own path without the support of Western donor aid that the administration is dependent on to function. This would mean that the livelihoods of 145,000 civil servants in the occupied Palestinian territories would disappear.

Today, most of Israel’s traditional enemies have either been weakened or neutralized: The Palestinian leadership has been co-opted through U.S. largesse; Jordan and Egypt’s peace deals have weathered even the thorniest of diplomatic crises; and Iraq and Syria have been carved up by the campaign to oust the Islamic State.

Hatuqa seems to favor a new, unified, and more militant Palestinian leadership that can stand up to Israel, ignoring her own points that the Arab world is no longer behind them in any way close to how things were in the past.

And the main point of the slowly emerging “deal of the century” is indeed to throw the Palestinians under the bus, as the FP headline says Saudi Arabia is doing.

The reason is simple – simpler than the wishful thinking that Hatuqa has for a strong, resistant Palestinian leadership.

Up until now, the peace process has had one major, unfixable flaw: that the desire for peace in the West was stronger than anything else, and the world was willing to do anything to get the Palestinians to say “yes.” As a result, the Palestinian leadership has had zero incentive to compromise for peace, because the pressure was all on Israel.

The PLO’s veto power – backed by the perceived support of their Arab brethren, the seeming unified threat of the Arab street, and the backing of the EU and President Obama of always pressuring Israel – is what doomed peace. Compromise was unthinkable. Preparing the Palestinian Arabs for peace was never done. Because, as Abbas said in 2009, all they had to do was wait – things were fine in Palestinians’ day to day life.

Now, the Arab world is prepared to move on towards peace  with or without the Palestinians. (Really, detente, but that is all Israel has with Egypt and Jordan anyway.) The Palestinians are losing funding, political support, and the security they had that the world was behind them. They celebrate “victories’ like Argentina soccer team deciding not to go to Israel while they are watching their real support go down the drain.

They can choose to cut the best deal they can while they can – or they can choose to ignore the sea change that has happened in their neighborhood. They can pretend that BDS will kill Israel while Israel keeps getting stronger and stronger.

It is apparent what path they have chosen so far. And that is exactly why they should be thrown under the bus – because the days of the automatic Palestinian veto over any peace plan are over.