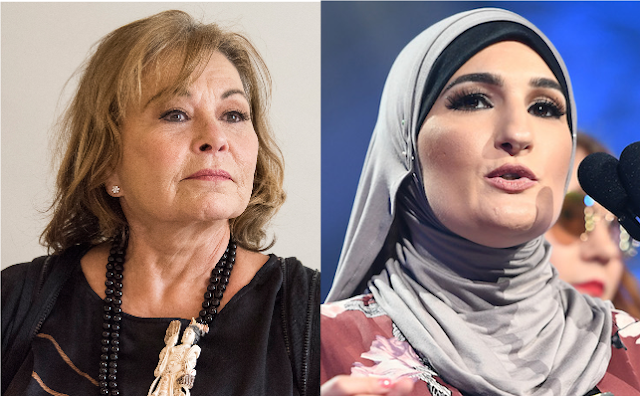 Many people have found the Official EoZ Intersectionality Victimhood Calculator that I released ths week to be very helpful in figuring out who is the bigger victim in any conflict, according to today’s “progressive” groupthink.

However, the Calculator’s utility goes beyond comparing people or groups in conflict. It can also explain individual events.

Seriously – one tweet wrecked Roseanne.
What does it take for Sarsour?

The Calculator provides the answer.
Roseanne Barr’s score in the calculator is a very bad -17:
Woman +6
White -1
Republican or conservative -3
Jew -3
Identifies proudly as Zionist  -8
Trump supporter -8
Anyone with a score below zero is presumed to be immoral or evil. A single wrong step is enough to justify this prejudice by the supposedly colorblind “progressive” crowd. So a single tweet from Roseanne with her horrendous score and she is not given the opportunity to apologize, or to explain – her tweet is viewed as confirmation of what everyone “knew” about her to begin with. The media, including her bosses at ABC, are not going to give her a second chance. Her tweet confirmed the existing bias inherent in her poor intersectionalist victimhood score.
Now let’s look at Linda Sarsour’s score:
Woman +6
Muslim +5
Arab, other Middle Eastern  +5
Wears hijab +2
Palestinian +2
That is a +20, an excellent score for the left-wing and their sympathizers.
In this case, Sarsour presumed to be righteous, because she checks off so many of the “victimhood” boxes which give a moral authority to anyone who happens to fit the “correct” categories. She can say whatever she wants and she is given the benefit of the doubt, and when she seems to cross a line or ten the progressive crowd is more than willing to overlook her words and judge her purely based on her intersectional victimhood score.
Sarsour has an additional advantage, which is that any reporter who might consider objectively documenting the many outrageous things she has said that prove her hate and bias needs to worry about appearing misogynist, Islamophobic and anti-Arab. The fear of blowback has a chilling effect on what gets reported in most media. People with scores below zero are enthusiastically attacked by most mainstream media reporters, people with high scores are treated with kid gloves.
There you have it. The idea that the world is fair is a joke – the only real way to measure people’s righteousness is by using the Calculator and embedding the scores’ bias into your consciousness. That is what a significant percentage of “progressive”  time is spent doing.

The bias that the calculator exposes is real, and it affects real people. The irony is that the very people who bristle at the idea that they are biased are actually the real bigots.

UPDATE: For the record, I believe Roseanne’s explanation for her tweet not being intentionally racist. There have been many people of color who I never identified as such based on their light skin without seeing articles that identified them as such, most recently Meghan Markle.

Full disclosure: A couple of years ago Roseanne had donated to EoZ.