In 2015, Amnesty International spent who knows how many thousands of dollars to create an online database that purported, very falsely, to document every single death and injury (to Palestinians) from the 2014 Gaza war.

Despite my proving how wrong it was (and Amnesty read my posts), they refused to correct their data, which is still online, and still claiming hundreds more civilians killed than any other source including the UN and B’Tselem. 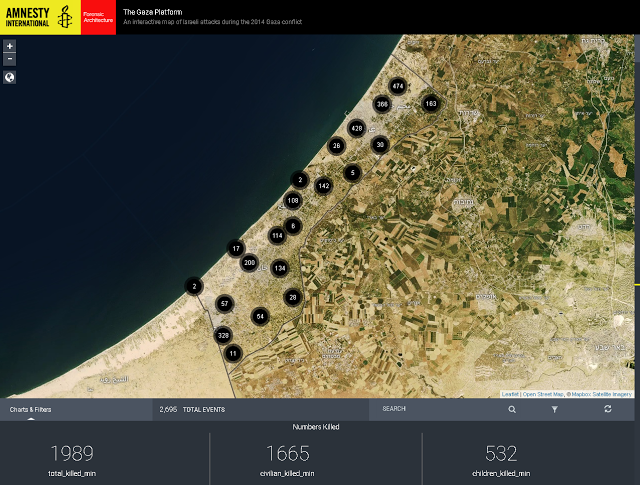 At the time, Amnesty justified its use of this massive amount of (flawed) research and programming by saying “Ultimately, the vision is to create a tool that could be used during future conflicts, whether in Gaza or elsewhere, to report on research findings and reveal emerging patterns that could be used to pressure those with influence over the warring parties to take action to stop violations of international humanitarian law in real time.”

And yet, for some reason, Amnesty has not found any reason to spend this much effort in any other conflict. Syria, Iraq, Yemen, Libya, Afghanistan – none of those conflicts are worth Amnesty’s efforts.


More than 40,000 civilians were killed in the devastating battle to retake Mosul from Isis, according to intelligence reports revealed exclusively to The Independent – a death toll far higher than previous estimates.

Residents of the besieged city were killed by Iraqi ground forces attempting to force out militants, as well as by air strikes and Isis fighters, according to Kurdish intelligence services.

Hoshyar Zebari, until recently a senior minister in Baghdad, told The Independent that many bodies “are still buried under the rubble”. “The level of human suffering is immense,” he said.

This is far more causualties, in a much smaller area, with far more civilians killed by both sides.

Wouldn’t this be a perfect vehicle for Amnesty to use its platform?

But there is another rule that Amnesty has for these sorts of initiatives. If Israel cannot be blamed, then it really isn’t that important to spend much time and money into documenting it.