TOP NEWS
http://elderofziyon.blogspot.com/2016/08/when-max-blumenthal-exposes-antisemite_15.html
As you all probably know, Max Blumenthal is an award-winning author – sort of: in 2013, he made the Simon Wiesenthal Center list of the “Top 10 Anti-Semitic/Anti-Israel Slurs” in the category “The Power of the Poison Pen.” It was a well-deservedaward for his book “Goliath,” which presents Israel as the Nazi Germany of our time. Just as the Nazis were convinced that “the Jews are our misfortune,” Blumenthal and his fans are convinced that the world’s only Jewish state is our misfortune. So it’s no coincidence that Blumenthal has fans wherever there are Jew-haters.
But of course, Max Blumenthal has long complained that it is terribly terribly unfair to consider his writings antisemitic, and he was therefore no doubt enormously pleased last week when he could finally show the world – or at least his Twitter followers – who the real big bad antisemitic wolves are: isn’t it a dreadful scandal, and definitely a groise shanda, that Max Blumenthal caught “digital McCarthyite @JGreenblattADL favoriting an anti-Semitic account that defends him”?!?!?!?! 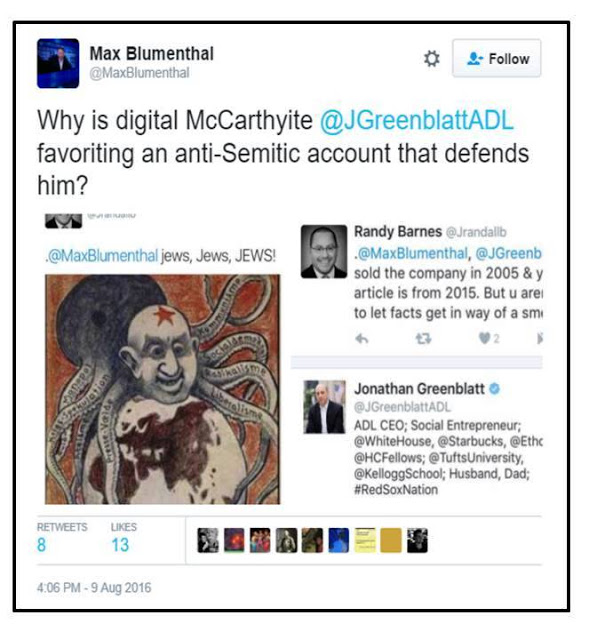 So yes, this would be Anti-Defamation League (ADL) Director Jonathan Greenblatt palling around with antisemites – but no, most definitely NO, Max Blumenthal doesn’t get sarcasm when it comes to his own antisemitism … In fact he knows so little about antisemitism that he doesn’t even realize that antisemites are not in the habit of defending the ADL. But perhaps Max Blumenthal thought the ADL is paying antisemites to pretend being all for the ADL??? You know, sort of like the “pro-Israel lobby” boughtCongress and would LOVE to buy Black Lives Matter in order to muzzle them??? 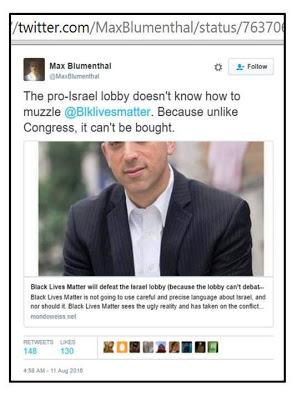 Incidentally, the article on the “hate site” Mondoweiss that Blumenthal linked to attacks the ADL, and in particular Greenblatt. And it just happens to be written by the very same “professional poker player and dog trainer” who not that long ago valiantly defendedMax Blumenthal’s vilification of Elie Wiesel.
But back to the image that provided Blumenthal his gotcha moment. It was posted by Twitter user Randy Barnes – who describes himself in his Twitter bio as a Zionist Jew and has “עם ישראל חי” in it (something few antisemites really like). From this alone it should have been quite obvious that Barnes meant to mock Blumenthal’s own world view. After all, Blumenthal is one of the leading anti-Israel activists who try to connect pretty much everything that can be criticized in the US to Israel in a desperate attempt to piggyback on social unrest that has nothing whatsoever to do with Israel. (That’s in addition to being convinced that the “pro-Israel lobby” is on a shopping spree in the US…) 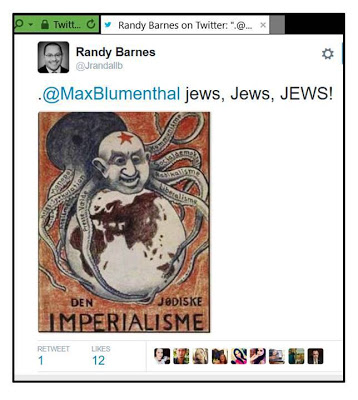