As we’ve mentioned before, most recently in August, during the 1970s Israel tried to build permanent, modern homes for Palestinians in Gaza so they wouldn’t have to live in decrepit “refugee camps” and would have a chance to build normal lives. 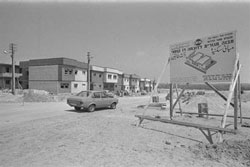 Over 2000 Gaza families moved into the new homes.

The PLO and the UN were dead-set against this. With a mixture of intimidation against those who wanted to move into the new homes and the UN passing two resolutions (31/15E and 34/52F) condemning Israel for trying to improve the lives of the Gazans, the plan fizzled.

Lets go back another 11 years.

Here’s how UNRWA describes the history of the Shuafat camp:


Shu’fat camp is located on the outskirts of Jerusalem. ..The camp was established by UNRWA in 1965 in order to provide improved housing for the roughly 500 refugee families living in Mu’askar camp in the Old City of Jerusalem.

UNRWA, in this case, wanted to provide improved housing. The Mu’askar camp was in the Jewish Quarter of the Old City, and Jordan provided the space to UNRWA, but the homes were in bad shape and UNRWA wanted to move the residents.

The residents lived near the Al Aqsa Mosque and many worked in the Old City souks. They preferred to live in the old Jewish homes, as bad as they were.

But UNRWA wanted them to move.

So it forced them to move, and with the help of the Jordanian army, all the residents were forced to move to Shuafat.

This is all detailed in this book: 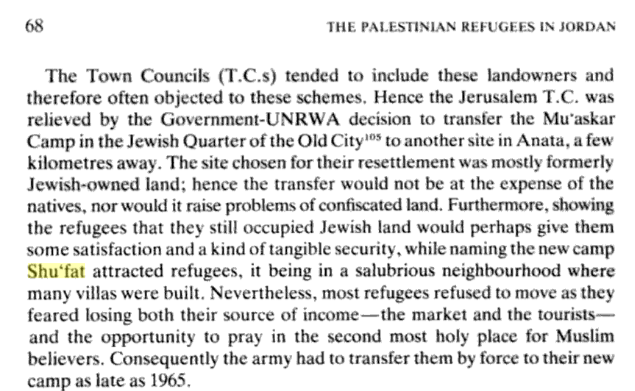 Actually, hundreds of families were forcibly moved into Shuafat as late as July 1966 according to UNRWA documents (which didn’t mention the Jordanian army’s role, and didn’t mention that most residents refused to move.)

Gazans moving voluntarily into new homes was condemned as illegal by the UN in 1976, but the forcible removal of Palestinians from their (stolen) homes into another neighborhood (that was also stolen from Jews) did not elicit a single peep from the world. In fact, this episode has been entirely whitewashed by UNRWA and forgotten by nearly everyone else.