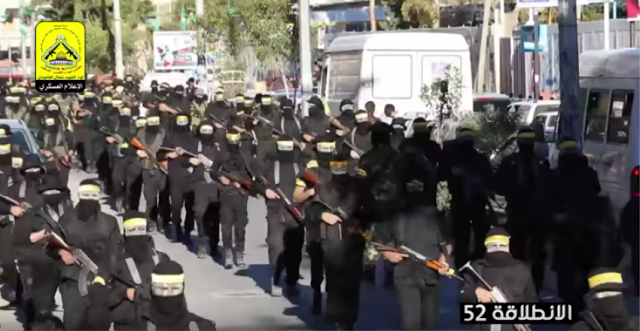 In 2007, Mahmoud Abbas officially announced that all armed groups outside official PA security forces were illegal and that the Al Aqsa Martyrs Brigades were dismantled.

It’s been nearly ten years, and nothing has changed.

This month the Al Aqsa Martyrs Brigades openly participated in the 52nd anniversary of Fatah’s first terror attack. Their masked terrorists paraded in public, through city streets, with their weapons including what appeared to be rockets. (These videos were made in Gaza.)

When Israel makes a stink about Abbas violating agreements or doing things that are against peace, sometimes the media starts asking questions and you will see a vague announcement or denial from some Palestinian official. But the open acceptance of a separate armed terror group under the Fatah umbrella is completely unreported. And it brags about attacks it makes against Israel in the West Bank.

It doesn’t fit the narrative of a “peaceful” Mahmoud Abbas and therefore the story must be blackholed.