It is very easy to be negative about the Trump/Kushner plan for the Middle East. Former diplomats, however, seem to feel almost threatened by it.

Because it might show that their very assumptions have been wrong for decades.

Any article that says why the plan is doomed before the plan is known looks like more of an attempt to sabotage it, rather than an honest attempt to help bring peace to the region. Why would people who dedicated their lives to peace in the region want to kill a completely different approach, even if they disagree with it? It isn’t like their efforts have exactly been successful. 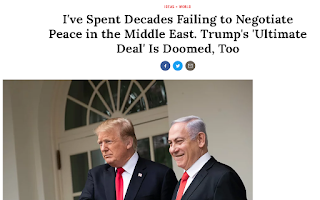 Aaron David Miller, who has been part of the negotiations since Oslo, writes an article in Time entitled “I’ve Spent Decades Failing to Negotiate Peace in the Middle East. Trump’s ‘Ultimate Deal’ Is Doomed, Too.”

Sure, these negotiations are part real-estate deal over land. But they are also shaped by a bitter struggle between two peoples, driven by historical trauma, identity, dignity, security and contested sacred religious space.

The Administration’s current plan misunderstands the Palestinian stake in the conflict and, even if it was not its intention, reveals that Trump and Kushner think the Palestinians can be bought off. It signals an assumption that Palestine can be induced to settle or compromise on what they regard as their basic rights in exchange for economic and financial incentives.

But if this was a matter of money and improving lives, we might well have bought a solution decades ago. I can’t tell you how many well-intentioned economic initiatives and Middle East Marshall Plans have gone the way of the dodo over the years. Kushner is right: creating better lives for Palestinians through accountable institutions and the development of both infrastructure and industry is a key factor in securing peace. But it’s not the key to achieving a conflict-ending solution.

I don’t think this is the thinking. I believe that the Trump administration is looking realistically at the history of Palestinian leadership. Kushner and Trump see the consistent Palestinian rejectionism of peace combined with their ideas of entitlement to claim the spoils of intifadas they have lost and wars where they have consistently backed the wrong horse.

The old Oslo-era diplomacy gives respect to the Palestinian side – the side that should be compromising to get a state – and that respect has made them less likely to want to compromise.

Trump does not want to reward this behavior any more . It didn’t work under Clinton and it was disastrous under Obama, where the more respect he gave Mahmoud Abbas, the less Abbas was willing to even negotiate, let alone compromise. This is not a sustainable model for peace.

However, it is all that traditional diplomats know how to do. The idea of actively disrespecting one party to the negotiations is anathema to normal diplomats. But diplomats usually don’t have to deal with people who have as much bad faith as Palestinian leaders.

The upshot is that peace is literally impossible using the old, bilateral negotiations formula which fell apart long ago.

Ordinary Palestinian Arabs just want to live their lives in dignity. The majority don’t care about Palestinian nationalism. Their ancestors, by and large, came from other areas of the Arab world and freely moved from place to place for economic reasons, not political reasons.

Admittedly, this has been changing. Decades of incitement and indoctrination in Palestinian and UNRWA schools have created a generation or two of people who are more likely to be stirred by the empty slogans of the PA or Hamas. But most Arabs are normal people who want to raise their families and to have decent jobs.

If there was a referendum on a decent economic plan, the Palestinians would overwhelmingly choose it.

Gulf leaders know this. They are the ones that have been throwing good money after bad, and have gotten tired of supporting a cause where even the Palestinian leaders cannot work together.

Top down strategies simply will not work with this dysfunctional, greedy Palestinian leadership for whom “dignity” means to beg for Arab money while rejecting tax revenues that don’t include money for them to pay terrorists. Regular Arabs know that this is not real dignity. Regular Arabs are the ones paying the price.

It may be politically inconvenient for the Trump Administration to admit, but on this one, economics can’t trump politics. A vibrant economy that moves people and goods requires security, predictability, transparency, freedom of movement and capital, and, above all, buy-in from the political establishment. It can’t be done in a free-fire zone (see Gaza) or in a West Bank where 60% is still controlled by the Israelis and where the Palestinian Authority that controls the remaining 40% face serious political and economic constraints. Why would serious investors want to put their money into Gaza or the West Bank without assurance that the region will be stable and secure and that people and goods can move without impediments and restrictions? Or without a clearer understanding of who will have authority over land, water and development? Neither of those fundamental questions can currently be answered.

It is funny that someone who worked for a President whose strategy to win elections was the slogan “Its the economy, stupid” is now disparaging a plan to work on exactly that above all else.

The Trump plan is indeed to bypass the Palestinian leadership. Give them chance after chance to come to the table and let the people see that they won’t even try.

The Palestinian leaders do hold the political cards – but only to stand in the way of economic help. Again, we don’t know what will come out of Bahrain, but if there is a specific plan that would provide Palestinians with  jobs and a way to build their own economy outside the aid and NGO-based economy they have – and if their leaders block it – those leaders become more and more irrelevant.

They would try to frame that opposition in terms of “dignity” but that wouldn’t work, since Israel doesn’t gain anything directly – no tax revenues – from such a plan.

Either the Palestinian Authority is shamed into doing what is best for its people, or it will be toppled, because the 25% or so unemployed in the West Bank will not pretend that false claims of dignity are more important than their families.

The chances of success are very low. Even Jared Kushner admits that. But the chances of Miller’s and later John Kerry’s style of diplomacy working are absolute zero. Since 2001, that style has made things worse.

Different and out of the box approaches to peace are difficult and unlikely to work – but people who really care about peace instead of their egos should be in the forefront of cheering a new approach on, rather than trying to derail it before it even starts.