France’s foreign minister says moving the U.S. embassy in Israel to Jerusalem from its current place in Tel Aviv would be a “provocation” and a threat to efforts for a two-state solution to the protracted Mideast conflict.

Minister Jean-Marc Ayrault …cautioned U.S. President-elect Donald Trump against moving the U.S. embassy before new peace negotiations can be held. The move could be seen as recognizing Jerusalem as Israel’s capital after decades of insisting that the city’s status must be determined by direct talks.

It is Mohammed cartoons all over again.

There is no legal reason why the US should not move the embassy. The only reason against it is because of fear that Arabs will go crazy and start killing people.

And this fear means that Muslims have veto power over literally anything they don’t like worldwide.

There doesn’t have to be any logic – the entire underpinning of this blackmail is that Arabs and Muslims are irrational and illogical.

The Mohammed cartoons were the same way. No one will print cartoons of Mohammed because Muslims might freak out and kill people. 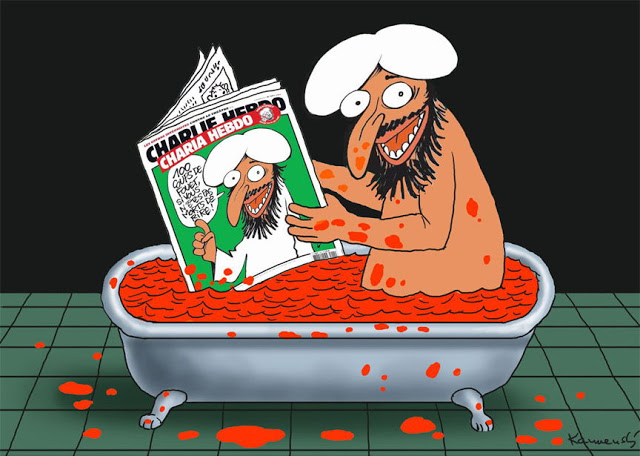 But their irrationality is accepted, so they are not blamed for their threatened violence. Only the Westerners who “provoke” them are to be stopped, not the Muslims or Arabs themselves.

There is one other thing in common between the Mohammed cartoons and the potential move of the embassy: The aggrieved parties pretend that they are against international law.

Just like Muslims have been trying (and have failed) to add language to UN treaties and resolutions against “defamation of religions“, so do Palestinians now claim that the US moving the embassy is against international law:

The chief Palestinian representative to France says moving the U.S. embassy in Israel to Jerusalem from Tel Aviv would violate international law and adds that he does not think Donald Trump’s new administration will make such a decision.
Salman Elherfi told The Associated Press that a Mideast peace conference Sunday in Paris sent a “very clear” message calling on everyone not to make any changes that would affect a final solution for the region, especially regarding the status of Jerusalem.
He says “I do not believe that the United States will violate international law because transferring the embassy of the United States into an occupied territory would mean admitting the annexation of this territory by Israel.”

Now they are claiming that all of Jerusalem is occupied territory. And there is no pushback on such an obvious lie – because Palestinians are assumed to be irrational liars to begin with, so why hold them responsible for something that is their nature?

This is how the “enlightened” nations of the world treat their Muslim and Arab friends – as irrational, illogical liars. And when you treat them that way, they are happy to take advantage of it.

UPDATE: There is a third parallel: In neither case would anyone actually get hurt if it wasn’t for the same people “warning” the West of a “spontaneous outbreak of violence” being the ones who incite the violence to being with.