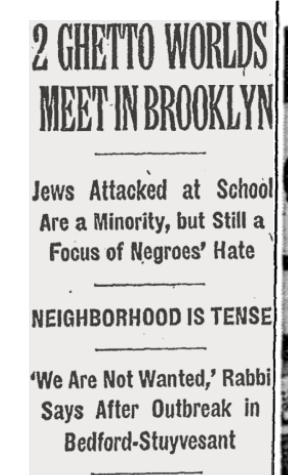 This New York Times story from April 23, 1964 discusses an attack by black youths in Bedford-Stuyvesant on Jewish kids in a Lubavitcher yeshiva.

There are some parallels with today’s antisemitic attacks in Brooklyn against mostly elderly Jews, but today the media doesn’t want to be accused of racism so hardly anyone is even mentioning the race of the attackers.

In contrast, this article tries to understand the source of the violence in the black community. The black youths, already subject to the endemic racism of the time, see in the religious Jew a white target that can’t fight back. But there is also traditional antisemitism there.

Today, the people trying to understand the current attacks on Jews are only looking at how the Jews might have brought it onto themselves rather than the bias of the attackers.

In other words, in some ways people were less antisemitic in 1964 than today.

The children of the Lubavitcher Yeshivoth are Orthodox Jews and do not look like other American children. They wear skullcaps and have the fuzzy beginnings of beards and there is to them a look of the Old World and of the ghetto.

In that black world that one Negro referred to yesterday as “the bottom of the bottom” they represent a curious focus of hatred. They are white, yet they are a minority, and in the eyes of the Negroes, a weak and defenseless minority. For about a decade trouble has been simmering.

Tuesday the tension erupted in a brief explosion when a gang of older Negro youths shouting anti‐Semitic slogans attacked the Jews. Several of the students and two rabbis were injured.

Yesterday the police kept a close watch on the school and promised a round‐the‐clock guard for an indefinite period. The Jews were shaken, more emotionally than physically, and during the day there was a long series of visitors of all faiths and colors, come to assure them that the incident was unfortunate.

Yet in the eyes of the school’s officials it was more inevitable than unfortunate.

“It’s been building up for several years,” said Rabbi Samuel Schrage. “We are desperate to get out of here.

“We are not wanted here, we are not liked here, and we do not have the respect of our neighbors.”

At almost the same time a police official, a Negro, was saying: “It has all the makings of trouble. This is a very tough area. You don’t have to be a genius or a sociologist to spot the dangers.”

Another police officer added: “The Negroes are simply doing to the Jews what the Irish used to do to the Jews.”

Rabbi Schrage disputed this. The yeshiva had trouble with the Irish, he said, “but the Negroes are more flagrant, more audacious.” He smiled and added: “They have more chutzpa.’ Chutzpa means gall, among other things.

Tuesday’s incident, because of its racial and anti‐Semitie nature, overshadowed an event of far greater violence that indirectly triggered the Tuesday attack.

This was a stabbing on Saturday night that took the life of a 14‐year‐old Negro boy, Major Jones. The attack took place in a dispute among a group of Negro youths. According to the police, young Jones was probably not a member of a gang, and so technically he did not die in a gang fight.

On Tuesday a wake was held for him at the Brown and Mitchell funeral home, which is only a block and a half from the yeshiva. Many of the youth’s friends were at the wake. The mood was highly emotional. Many of the young Negroes sobbed.

After the wake, a group of Negroes ‐ not an organized gang ‐ passed the yeshiva as the students were having a lunchtime break. Some of the Negroes, shouting epithets, tried to shake down the Jewish children. Rabbis went to the aid of the students, and soon there was a fight. The Negroes reportedly were armed with knives, bottles, chains and sticks.

“It was like watching a movie from Africa, one of those rebellions where the Africans attack the whites,” Rabbi Schrage said.

A crowd of about 50 persons, almost all of them Negroes, gathered to watch. They made no move to stop the fight.

Finally a white man, Leo Berman, grabbed one of the Negroes, and the others fled.

The neighborhood was not always Negro. Twenty years ago, when the yeshiva opened, it was primarily Irish. The school building, bought at an auction, had once housed the old Unity Republican Club.

In the early days on Bedford Avenue, the Jews with their skull‐caps and the older students with their beards were frequently taunted by the Irish.

“They had beards, and people with beards are different, and so people threw water on them,” Rabbi Schrage related. “But with the Irish kids it was mostly a case of yelling a curse and running. And some of the parents would come by the school and apologize. That doesn’t happen now.”

The Irish, too, moved away, and about 10 years ago the neighborhood became predominantly Negro—and then finally altogether Negro.

At the same time, ironically, the yeshiva flourished as Orthodox families all, over the city sent their children there. Many of the fathers of the current students are rabbis. Many work in the garment, diamond or pearl industries. More than a third of the students, according to Rabbi Schrage, will become rabbis.

They could hardly offer a sharper contrast with the young Negroes in the area. They know nothing of fighting, nothing of gangs. In many of their homes television is not permitted because there is too much violence on it.

“These kids don’t know dancing or dating,” said Rabbi Schrage. “For them a big treat is if someone reads a Bible story.

“They can’t protect themselves, and the Negroes know this. So the Negroes would sooner go after them than some white kid who might fight back.”

The students, he said, were regularly shaken down for small change, and frequently lost hats, coats and briefcases. The transit passes that all city school children get are specially stamped “Good on Sunday” because the Yeshiva students go to school on Sunday, and the Negroes covet these, too, Rabbi Schrage said.

The Negro youths’ world, in contrast, is a violent one. It is a world of gangs, of absenteeism from school, of early sexual experience and sometimes of early death.

To the Negroes, the Jews are white, richer, different. They are also obviously weaker. In addition, said a rabbi, an undercurrent of anti‐Semitism is frequently evident in the meetings and teachings of the Black Muslims.

All this, added to what one police official called “the overpowering feeling of frustration in that area,” led to the conflict.