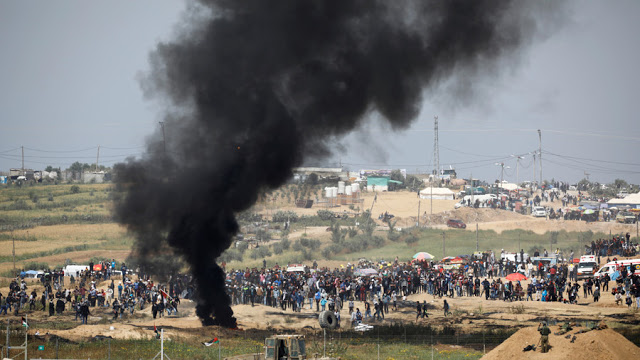 A few years ago, there was another “march” on Israel. At the time, legal scholar Eugene Kontorovich wrote a relevant article on the legality of Israel defending itself in such a situation – using a startlingly similar event that happened in the Western Sahara:

In 1975, Spain appeared ready to pull out of much or all of Western Sahara, a large desert region between Mauritania and Morocco. Rabat hoped to annex the mineral-rich territory, but its claims of sovereignty were successively denied by a report of a U.N. fact-finding mission and an advisory opinion of the International Court of Justice, both of which favored self-determination for the region.

Morocco was not deterred. Right after being rebuffed by those international organs, it mounted the Green March — sending 350,000 unarmed Moroccans on a well-choreographed hike into Western Sahara. Spain was not willing to fight against such numbers, and evacuated the territory. The Moroccan military moved in, and the territory remains under Moroccan control to this day.

The press has taken to calling the Arabs marching across the Israeli frontier “protesters.” In fact, “protests” are contained within a country; the organized crossing of a frontier is an invasion. In 1975, when Western Sahara was the victim, the world community was clear on this point (even though the Moroccans were unarmed.). Other Arab leaders called the Green March “a violation of the sovereignty of” Western Sahara and “an act contrary to international law.” Prominent international scholars described it as an illegal use of force, a “stealing of the Sahara,” in the words of one of the leading international lawyers of the time. The U.N. Security Council passed a measure that “deplored” Morocco’s invasion.

Moreover, despite the nominally civilian character of the marchers, several U.N. General Assembly resolutions recognized that the enterprise constituted a military occupation by Morocco. Observers noted that the march could not have gone off without the permission, and indeed encouragement, of King Hassan of Morocco, and thus he must take responsibility as if he had ordered army units across the border. It was a conquest despite the lack of arms: A large organized mob can be as forceful as an armed military unit. Indeed, as the Spanish capitulation proved, a march could be a more effective tool of conquest than a military strike against Western armies reluctant to fire on civilians.

Also, the Lawfare Blog has an interesting article on Israel’s rights under international law to act against Gaza marchers:


To be clear, the use of indiscriminate fire against civilians, even if they cross a border or sabotage a military installation, is absolutely prohibited. Still, the view that military forces defending the border should remain idle because the risk to lives is not imminent—even after the exhaustion of less-lethal means and amid the destruction of the border fence by a mob—is too strict and narrow an interpretation of international humanitarian law.

The purpose of IHL is to strike a balance between military necessity and humanitarian concerns during an armed conflict. Rules that ignore legitimate military needs are not likely to be sustainable. Moreover, a significant breach of the border fence could be exploited for planting IEDs or for entrance into Israel of terror squads or a violent mob aiming to attack Israeli civilians. Such developments present a grave and concrete danger to life, even if not imminent in nature.

In an extreme scenario, rioting civilians—even unarmed—can be considered as directly participating in hostilities provided that they perform acts of violence which are specifically designed to support their side of the conflict and harm the enemy state. Such acts of violence may include destruction of military equipment or diverting attention of the armed forces to support an attack occurring in another place. In fact, this opinion was expressed in an expert meeting convened by the International Committee of the Red Cross in 2012 on the use of force in armed conflict and the interplay between the conduct of hostilities and law enforcement paradigm. (See page 26 of the report.)

Note, however, that this was not the mainstream opinion of the experts present in the meeting. For that reason, as well as for practical and policy considerations, the defending military in extreme situations involving violent civilians should focus its use of force on people who appear to lead and instigate the rioters. Even then, the military should use the minimum amount of force needed to stop the harmful act.

Once again, the media is dropping the ball by not even pretending to look at the rights that Israel has under international law to defend itself.