Asa Winstanley calls himself an “investigative journalist” for Electronic Intifada. But of course he is nothing of the kind – he is an anti-Israel propagandist.

This morning, he tweeted: 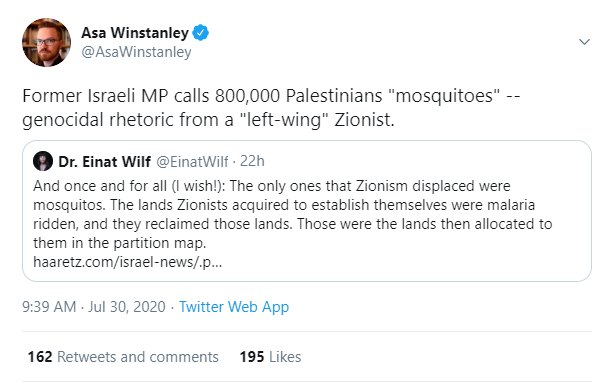 Einat Wilf’s tweet referred to a Haaretz article from 2018 about how the Zionist population of Israel before 1948 closely mirrored the areas where Jews had drained the swamps and killed the mosquitoes that caused malaria. Wilf’s point is that Jews did not displace Arabs, only mosquitoes.
There is no way that Winstanley could have misinterpreted the tweet to mean that Wilf was calling Arabs mosquitoes.
And after he made his ridiculous accusation, even people who are sympathetic to his anti-Israel viewpoint pointed out that he was wrong this time.
But hours later, this erstwhile “journalist” didn’t acknowledge his mistake.
Because it wasn’t a mistake. It was Goebbels-type propaganda, adding to the ever growing list of fake Zionist quotes we’ve seen over the years.

The anti-Israel crowd does not give a damn about little things like the truth. They have a crusade to wage to destroy Israel. Winstanley knows that his antisemitic fans will believe anything he says, so he’ll say anything.

The real question is why anyone ever takes his “reporting” seriously when he is a proven liar?