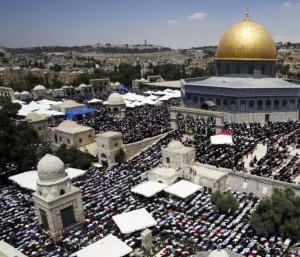 Jerusalem, March 28 – A representative of the religious council that administers the Temple Mount – known to Muslims as Haram al-Sharif – encountered difficulty in describing to a group of tourists today how the respect and attachment Muslims feel for the location is manifest in the five-times-daily practice of bending over and pointing their backsides toward the golden dome marking the spot where Muhammad landed with his horse on the way to Heaven.
Ali, a tour guide, detailed for his guests the worship routine at the Al-Aqsa Mosque at the compound’s southern end, an Islamic set of rituals that involves recitation of passages proclaiming the greatness of Allah while engaging in a series of prostrations. In the process, worshipers face south, pointedly directing their derrières toward the Dome of the Rock. The location, considered sacred in Islam because of its association with the Prophet, is thus subjected to a collective mooning of up to tens of thousands of Muslim bottoms at a time.
The guide attempted to explain that no slight was intended to Muhammad or his horse Al-Buraq, and that the demonstrable disrespect to the site was a mere function of bowing toward Mecca in what is now Saudi Arabia. A tourist observed that the awkwardness could have been avoided by constructing Al-Aqsa to the north of the Dome, allowing worshipers to display reverence for both locations at once, given that, as the Waqf insists, the Haram al-Sharif is the third-holiest place in Islam.
“I, uh, it’s important, but not as important as Mecca or Medina,” stammered Ali. “In fact we used to bow to the Rock, centuries ago,” he added, with a burst of confidence.
A visitor then pointed out that switching the direction of prostration after a period of bowing toward the Dome was an even bigger insult, as if Muslims were trying to convey that whatever had been there was no longer worthy of respect. “No, you don’t understand,” answered Ali, tension rising in his voice. “For Muslims the sanctity of this place is very important. We protect it all the time from desecration by, uh, Jewish settlers who storm it and want to bow directly toward the Dome of the Rock!” he paused to consider the import of what he had just said, then caught himself.
“I mean, it’s not for Jews to do that – it’s too holy,” he stammered again. “They desecrate the place with their Talmudic rituals and make false claims about there being a Jewish holy site in ancient times, which is why we started bowing toward Mecca inst- never mind. You people must leave now – you are showing disrespect for a Muslim holy site! Guards!”