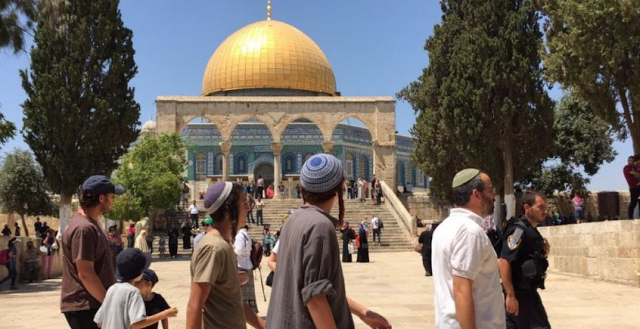 Here are some of the “attacks” they mention:


The occupation forces assaulted one of the guards of Al-Aqsa Mosque…
They arrested a member of the reconstruction committee, and removed another from his work place for 15 days….The occupation has been working for years on the establishment of Talmudic gardens in the vicinity of the historic wall of Jerusalem to obliterate the Arab monuments and give a Talmudic character to the holy city….
The occupation, as usual, especially on Friday, intensifies its strict measures in the city, erecting barricades, military barriers on the gates of the Old City near the Al-Aqsa Mosque, running foot patrols in Old Jerusalem, and horses in the streets and adjacent roads, while a helicopter and a radar plane flew over the holy city to observe the worshipers.
…The continuation of the so-called “alleged temple” organizations and their incitement to the Al-Aqsa Mosque and worshipers, amid calls for more intrusions, especially during their holidays.
The Antiquities Authority, accompanied by a military officer, stormed the Marwani chapel, and carried out a suspicious and provocative exploratory tour in the area
Members of the Knesset broke into the Aqsa Mosque and the continuation of the policy of political, economic and technological siege on the Al Aqsa and the city
In the Ibrahimi Mosque, the occupation prevented the prayer from being heard for 65 days, and closed it for four days with the pretext of the holidays (how they closed it for 65 days in September is a mystery)
In the area of ​​the airport, the Israeli occupation forces and their crews stormed the neighborhood and photographed residential buildings in the neighborhood, including a mosque threatened with demolition.

I’m sure some NGOs are taking note of these statistics so they can launder them into new reports showing the “increase of Israeli attacks on Muslim holy places enumerated by religious officials.”

The official Wafa news agency published this as well, meaning this is how the PLO officially views Jews visiting the Temple Mount too.