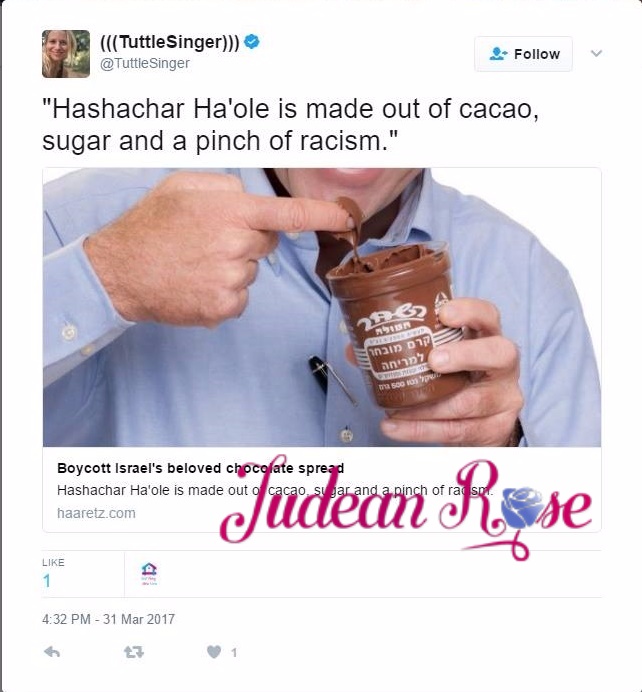 Chocolate spread. It’s made out of not much more than cocoa and fat. And it’s the most Israeli sandwich spread there is.

Kids love it. Parents love the convenience, but hate the lack of nutritional value. They sigh and give in, especially on Passover, when you can spread it on matzoh to make it taste less like cardboard and more like, well, CHOCOLATE.

My 16 year-old still likes  chocolate spread, but he always cautions us to only buy the Hashachar brand chocolate spread. The one with the yellow cap (there’s also a Hashachar chocolate spread with a white cap). That’s why it got our back up when Sarah Tuttle-Singer, the new media director at the Times of Israel, shared an article from Haaretz, calling the spread “racist” and urging her followers to boycott the company. 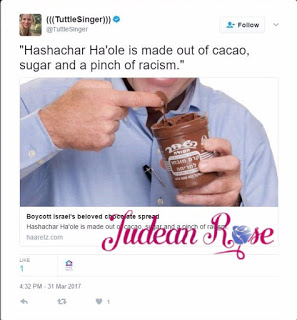 “What could be more Israeli than matza with Hashachar Ha’ole chocolate spread on top?” asks a Passover ad for this veteran brand, known to anyone who grew up in Israel.

Even though the ad immediately replies with a list of national symbols such as the flag, the anthem, a chain with a Star of David, as well as cultural symbols such as TV Channel One and popular Israeli melodrama films, it’s obvious that the advertisement assumes that public consensus considers Hashachar Ha’ole to be one of the consumer products most identified with Israeliness. However, it’s patriotic and nostalgic air is tainted: This is a company that donates tens of thousands of shekels a year to the settlements.

“I believe in a Greater Land of Israel, which you call ‘the occupied territories,’ and I wish I could donate even more,” CEO Moshe Weidberg told Haaretz in December 2015.

Regarding the option of donating to human rights group B’Tselem, he said he’d rather go bankrupt. Weidberg devotes part of his company’s profits to financing the occupation and the apartheid regime in the territories, along with its blatant violation of human rights. He espouses an ideology that makes him an enemy of democracy and a supporter of a benighted ultra-nationalistic regime that squelches any criticism. His opposition to any criticism of the occupation is so fierce that he’d rather go bankrupt (not a trivial matter, considering that his is a family business that’s been around since 1955) than donate to an organization that works to end the occupation.

It’s a declaration that’s commendable for its directness, honesty, openness and transparency. Weidberg has no problem with being political and annoying potential customers who oppose the occupation. Good for him. His clear political standpoint should be countered with a no-less clear and strong political stance.

Anyone opposing the occupation should boycott Hashachar Ha’ole, otherwise his or her ideology is meaningless. It’s a moral duty to exact this small price from Weidberg. It’s unseemly that a person objecting to the occupation should continue purchasing his products in the knowledge that he is thereby contributing to the settlements and submitting to Weidberg’s destructive and immoral ideology.

Hashachar Ha’ole is, regrettably, no longer Israeli. Apparently, there is no chocolate spread anywhere in the world more fascist and racist. Weidberg should be forced to face the ramifications of the ideology he is so loyal to. The fact that his products are identified with the occupation and the persecution of left-wing groups should be advertised.

He prefers to go bankrupt over donating to B’Tselem? The required response is that supporters of B’Tselem immediately cease, this Passover, being his customers.

Otherwise, in their apathy and lassitude, they are almost as bad as he is since their money will go to the settlements.

Instead of buying Hashachar Ha’ole products, one may as well directly contribute to the Ateret Yerushalayim yeshiva in the Old City and to the seminary in Elon Moreh. That, at least, will circumvent the self-deception.

“I wish we could give more,” declared Weidberg. Thus, advertisements for purchasing his products this Passover can be viewed as a collection of donations for the settlements.

In other words, Weidberg is a patriot who supports Jews settling their indigenous Jewish territory. No wonder Haaretz is upset. No wonder Sarah Tuttle-Singer is upset. Supporting the building of homes in Jewish indigenous territory?? Unthinkable, when your entire goal is to bring the State of Israel crashing down upon our heads.

Both would have you believe that Jews living in Judea and Samaria are stealing Arab land. Both love to listen and cry big fat crocodile tears as Arabs lie to them, recounting their invented humiliation at being forced to live under the thumb of the oh-so-oppressive Jews. This is what the Roger Alphers and Sarah Tuttle-Singers of the world care about most. 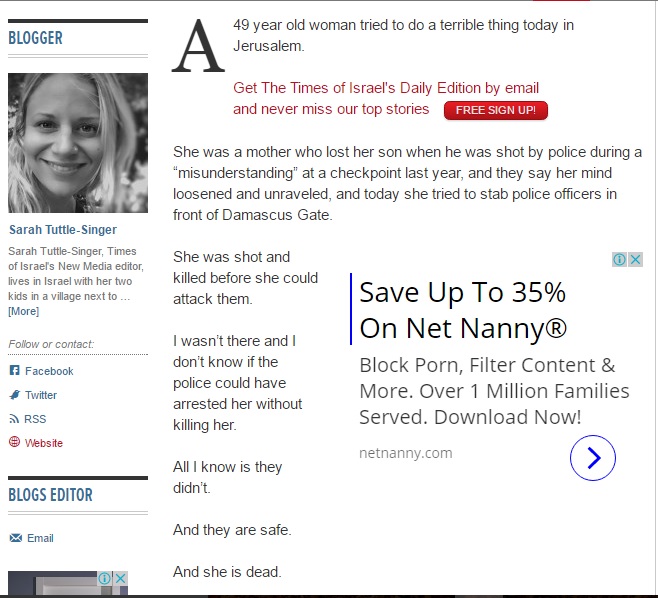 You know what they don’t write about?
They don’t write about Ayala Shapira’s brave speech to the European Parliament this week. Ayala was on her way home from her gifted math class when an Arab went up to the passenger seat of her father’s car, where she was seated, and threw a firebomb at her window. The Arab well knew that father and daughter always came home around this time. He timed the attack. He planned it. He knew a little girl was sitting there on that side of the car.
Ayala sustained burns on 30% of her face and body. Her face is disfigured. But when she spoke to the European Parliament last week she said, “I can’t say, ‘I want to be beautiful,’ because it means that today I’m not beautiful, and that’s not true.”
This was something that didn’t interest Sarah Tuttle-Singer enough to tweet about it, write about it on her Facebook page, or blog about it at the Times of Israel. No. She was too busy writing about the suffering hearts of terrorists and how we shouldn’t kill them. She was just deeply absorbed in writing about boycotting anyone who supports settlement in Judea and Samaria. And when she wasn’t using her writing and her clout as an internet star to work toward bringing down the State of Israel, she was writing about the cute way her kids played with her vibrator.

I always wonder why these people live in Israel in the first place. Why do they live in Israel if they think this constitutes “occupation?”
The answer must be that they are attempting to undermine us from within, to infiltrate. They’re working for the other side. Because how could a Jew possibly find anything wrong with Jews living in their ancestral lands? It makes no logical sense. And a Jew calling to boycott other Jews’ businesses?
Unthinkable. Sick.

But that’s okay. Because in addition to these traitors, we have heroes. People like Ari Fuld. The minute he heard about Sarah Tuttle-Singer and Roger Alpher, he went out and started buying up Hashachar chocolate spread like there was no tomorrow. He bought it to give out to IDF soldiers to help make their Passover celebrations a little sweeter, more festive.

Ari kept us updated.
And of course, with his actions, Ari prompted a wild buying spree. Everyone suddenly had to buy Hashachar chocolate spread. Because that is the only patriotic thing to do! That is, if you care about Israel. Love it with all your heart.
One friend’s daughter took her patriotism and love of Israel one step further. She named her new son Shachar!
Shachar. It means “dawn.”
Maybe someday, it will dawn on the Roger Alphers and Sarah Tuttle-Singers of the world that they aren’t ever going to succeed at bringing down the Jewish State.
Not as long as we’ve got people like Ari Fuld and Ayala Shapira on our side.
Dawn? We say yes. It’s time. Wake up and smell the chocolate.

h/t Dov Epstein for the heads up on this story.