Maybe I’m late, but I recently discovered “American Muslims for Palestine.” It’s not a particularly prominent organization: it was founded in 2006; its Twitter account has some 6,600 followers, while the Facebook page – which describes the outfit as a “Public & Government Service in Falls Church, Virginia” – has some 15K followers. I’d love to know which government is behind this “service”…
In any case, the main “service” offered at the time of this writing on Twitter is a frantic effort to promote the hashtag #HonorRasmea in support of convicted supermarket bomber and US immigration fraudster Rasmea Odeh. I have to confess that it strikes me as not terribly prudent when groups that surely oppose restrictions on Muslim immigration to the US cheer a convicted terrorist like Odeh – though I guess the Trump administration will only be too happy to have this kind of opponents.
Consider this tweet: “If more people were like her, we would live in a more just world #HonorRasmea and come to her farewell.” Yeah, if more people bombed supermarkets full of Jewish shoppers and then sneaked into the US by lying about their terrorist past, it would be really great, wouldn’t it. 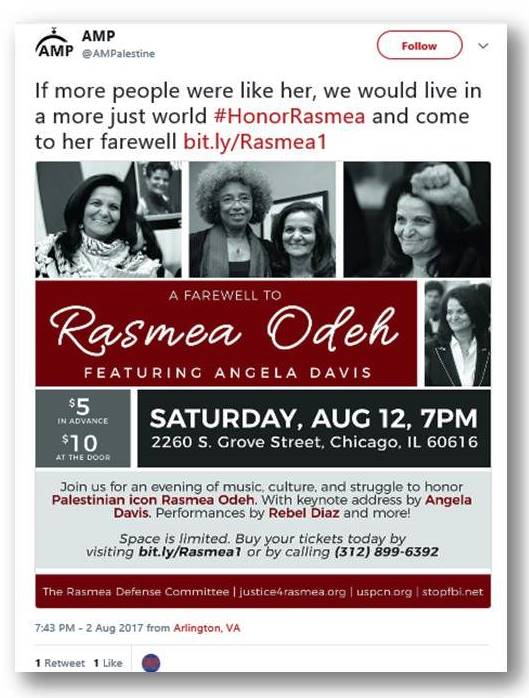 Another “service” provided recently by American Muslims for Palestine was a demonstrationwith “Friday prayers outside Israeli embassy;” the demonstrators were mobilized with the blatant lie “AQSA UNDER ATTACK” – with “Aqsa” referring to the entire Temple Mount. 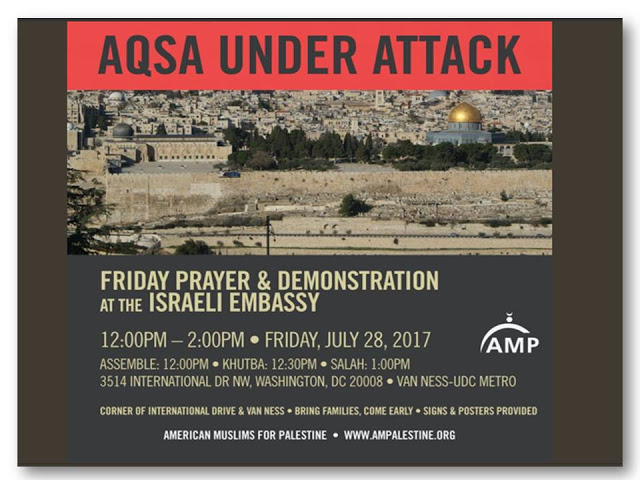 Just how low American Muslims for Palestine will go is nicely illustrated in a slideshow that is featuredon the group’s website under the title “Jerusalem in the crosshairs.”
We learn that it all started in December 1917, when the British marched into Jerusalem, “ending hundreds of years of Ottoman rule of Jerusalem, ushering in an era of colonization and dispossession. Despite Palestinians’ best efforts, the Judaization of Jerusalem has been ongoing since this period and exacerbated after the June 1967 war.”
Right – who wouldn’t be sentimental about the good old days of “Ottoman rule of Jerusalem,” when the city became the ‘backwater of a dying empire’ – but at least non-Muslims “lived under numerous restrictions” and were “subject to special taxes” that had to be paid “both to the Turks and the local Moslem authorities.” Glorious!!!
And naturally, when such glorious times end and non-Muslims, especially Jews, are no longer treated as second- or third-class citizens, rampant “Judaization” sets in. Horrific!!!
The slides are full of distortions and outright lies, which are all too obviously meant to incite and justify Muslim rage and terrorism.
The slide for June 7, 1967 is entitled: “Israeli forces occupy Al Aqsa;” the text mentions the raising of the Israeli flag on the Dome of the Rock – but not that the flag was quickly taken down; it also claims that Israeli soldiers “burned the Quran,” prevented worshippers from praying and confiscated the keys. Needless to say, there is no slide explaining that, in a concessionthat may have no precedent in history, Israel quickly handed control of Judaism’s holiest site back to the Muslim Wakf.
The intentionally misleading use of “Al Aqsa” for all of the Temple Mount in many of the slides clearly serves to add fuel to the fires of religious passions; one example is the slide for January 28, 1976, which asserts: “Israeli Supreme Court rules that Jews have the right to pray in Al Aqsa.” The next slide claims that “Members of the extremist Temple Mount movement storm Al Aqsa and raise the Israeli flag with the Torah.” The accompanying image is taken from a 2015 Daily Mail articleabout renovations at the Dome of the Rock and shows the shrine with two regular Israeli flags (without Torah!!!) in the foreground, i.e. clearly not on the Temple Mount, let alone the Al Aqsa mosque.
No less vile than the incitement propagated by American Muslims for Palestine are the justifications offered for the murderous Al Aqsa intifada and the more recent “stabbing intifada.”
Since American Muslims for Palestine prominently emphasizethat they want “to educate the American public and media about issues related to Palestine and its rich cultural and historical heritage,” it’s a pity that the historic Palestinian leader who clearly inspires their efforts gets no mention in the slideshow. But at least Palestinian President Mahmoud Abbas knows how to honor this important Palestinian hero: he has repeatedly paid homage to Haj Amin al-Husseini (a.k.a. “Hitler’s Mufti”), praising him for having “sponsored the struggle from the beginning.”