On Tuesday night, Viacom/CBS announced that they will terminate their relationship with Nick Cannon, whose antisemitic and racist comments were posted here on Sunday morning.

ViacomCBS condemns bigotry of any kind and we categorically denounce all forms of anti-Semitism. We have spoken with Nick Cannon about an episode of his podcast ‘Cannon’s Class’ on YouTube, which promoted hateful speech and spread anti-Semitic conspiracy theories. While we support ongoing education and dialogue in the fight against bigotry, we are deeply troubled that Nick has failed to acknowledge or apologize for perpetuating anti-Semitism, and we are terminating our relationship with him. We are committed to doing better in our response to incidents of anti-Semitism, racism, and bigotry. ViacomCBS will have further announcements on our efforts to combat hate of all kinds.

While I am not happy with cancel culture, from Viacom/CBS’ point of view it is too toxic to be associated with a bigot.

There is no way that Fox can continue having Cannon as host of The Masked Singer after Viacom/CBS already fired him. It is not s good look to appear to be more tolerant of antisemitism than another network.

That leaves Los Angeles radio station Power 106, where Cannon has a daily radio show. That show probably provides a decent chunk of the station’s revenue and firing him would be very expensive. It will be interesting to see how they handle this, but you can be sure they are not too happy about this.

Cannon had just been profiled Tuesday by Fast Company in a fawning piece that was written before they became aware of his racism.  That article details Cannon’s other shows and businesses. 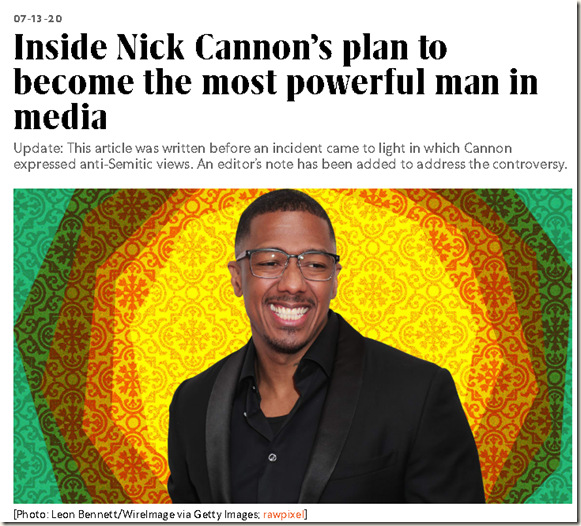 Nick Cannon has guided his career with a modest goal in mind: “to become the most powerful man in media.”

Judging by his current résumé, he seems to be on track.

Of course, the above doesn’t include his film and music career that spans two decades—not to mention his businesses outside of media, which include a Los Angeles-based vegan soul food restaurant he launched this year, and his line of headphones that have generated more than $80 million in revenue.

It’s an already dizzying track record, but Cannon is about to add what he hopes will become the crown jewel of his empire to tie it all together: his nationally syndicated daytime talk show Nick Cannon premiering in September.

E! is owned by NBC Universal., so Celebrity Call Center seems to be in danger as well.

Cannon’s his headphone business is probably safe, and the poor victim of the Rothschild plot against him will have to survive on the millions that he makes a year from that.