TOP NEWS
http://elderofziyon.blogspot.com/2017/03/valencia-and-kristallnacht-scale-of.html
As Jews, we’re always feeling our collective pulse. We read of an antisemitic incident and mentally compare it to events leading up to the Holocaust. How bad is this on a (Kristallnacht) scale of 1-10? Is it time to pack our bags and make an escape?
Well, last week there was an antisemitic event in Valencia, Spain, that rated an 8 on my personal Kristallnacht scale. There was a basketball game. The Hapoel Jerusalem team played Valencia. The lights were dimmed at the start of the game, at which point, cops came to the area where all the Israeli fans were seated and beat the crap out of them.
They used clubs.
The incident got little play in the press. I saw maybe three stories in total.
I shared the Israel National News story on Facebook, which said in part:

“About 30 fans, who came to support their team in their game in Spain, were beaten by local Spanish police officers who used clubs.

“Police said that the Jerusalem fans did not respond to the officers’ demands that they sit only in two rows at the back of the hall, which was not enough for all 30 fans, and claimed that the fans broke chairs and even raised a hateful sign against the officers.

“As soon as the lights in the hall were dimmed, the local police burst into the stands where the Jerusalem fans were sitting, and began to violently remove them from the hall. Anyone who tried to take pictures of the incident was attacked as well.

“Later, the fans were split into two groups – those who had ID cards and those who did not. Those who were without an ID card were physically searched by the officers.

“After ten minutes, during which the Jerusalem fans were surrounded by officers, they were released and were escorted to the nearest train station.

“Journalists who witnessed the incident reported that there were no disturbances by the fans, and that the only reason they were attacked was because they were Israelis.”

Dave Bendertagged Jonty Maresky on the thread, a fellow Efratian, who, as it turns out, is team physician for the Hapoel Yerushalayim basketball team. Jonty wrote:

“I happily found a replacement for this game so I wasn’t there, although hopefully we’ll beat them today thus forcing a final game in Valencia on Wednesday and I’ll be there.

“The Hapoel management were helpless in the face of a pre-arranged uniformed ambush, performed as the lights were dimmed thus circumventing the in-house cameras.

“The management announced yesterday that Hapoel will reimburse all the fans for the cost of their air tickets to Valencia.

“Antisemitism has many faces. Especially in Europe we [are] constantly reminded that it tends to be most malignant when it comes down from the administrative ranks of a particular society…..”

When I first read that story on INN, I had to look twice. I expect to see antisemitism in a story about soccer. Antisemitism is just rife in soccer. We’ve seen it in Holland, Bosnia, Italy, England, Poland, Croatia, and more. I figure that soccer is the most popular game in Europe and that it’s the kind of game where testosterone and tensions are going to run high. The kind of game where the common man is going to let loose and express himself, no holds barred.
I think we can pretty much gauge how Europe feels about the Jews from these many antisemitic soccer incidents.
But now Jew-hate appears to have moved into basketball, as well.
We did, of course, have the incidentlast year in Newton, Massachusetts, during which Catholic Memorial High School fans chanted, “You Killed Jesus,” at Newton North fans. But there, the principal of the Catholic school forced the chanters to apologize. Catholic clergy spoke out forcefully from their pulpits and educational programs on the subject of antisemitism were planned and executed in the schools.
That is how leaders of the community, how educators and the establishment, should handle antisemitism. With action, forceful statements, and education. Instead, what we have in Spain is the establishment actively taking part in the antisemitic proceedings, an outright abuse of power and position, a planned assault on Jewish Israelis by the police.
An “ambush” as Jonty called it.
They waited until the lights were low so the cameras wouldn’t catch it.
They were sly about it.
And it seems to me that when police beat up Jews on the sly, things are going from bad to worse.
Definitely an 8 on my Kristallnacht scale.
When I think about what happened in Valencia, I picture Nazis going after Jews, hitting them over the heads with clubs, pulling out their beards, forcing elderly Jews to scrub the cobblestones of Berlin. That stuff was all very public, while in Valencia, the police waited for the lights to dim. They did it to Israelis, rather than local Jews. It’s when they do it in broad daylight, to random locals Jews that it may be too late for the Jews of Valencia (and Europe) to leave. 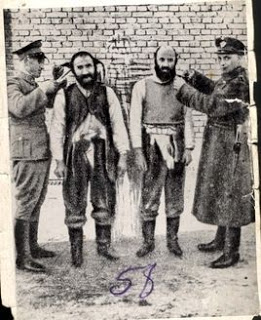 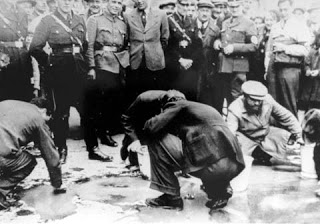 What happened is a symptom of an illness that is progressing, getting worse.
Not that there are many Jews in Spain, just 45,000 of them. After all, the Edict of Expulsion wasn’t annulled until 1968. That’s when the Jews began to come back. They opened a synagogue in Madrid and started building communities. Of course, there was no real religious freedom until Franco’s regime ended in 1977. But the Jews are always hopeful. 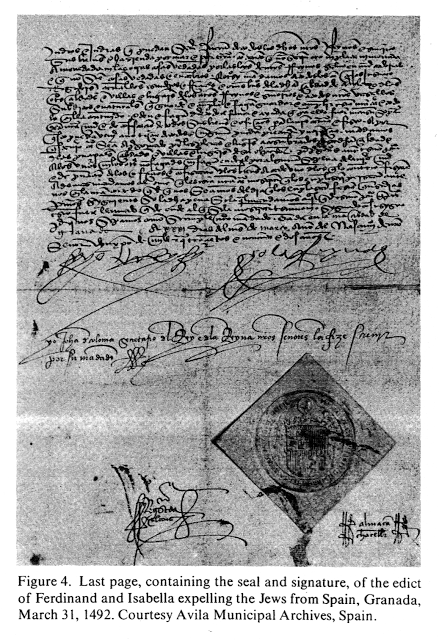 Now it’s time for them to be wary. Things are not looking good when the police beat up Jews in the dark so the cameras won’t catch it. Definitely an 8 on the Kristallnacht scale.
Not looking good at all.