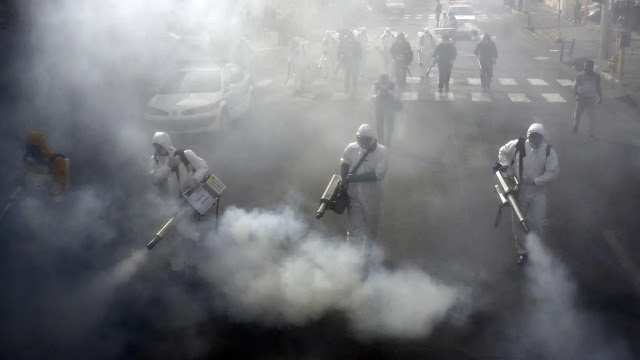 The Daily Beast has an article about the charge we’ve been hearing for weeks that says that US sanctions on Iran is causing life-threatening supply issues.

Parsing the article, however, shows that the “experts” are all speaking about a theoretical threat, and can’t point to any actual issues.

The Trump administration’s policy of crippling Iran economically through “Maximum Pressure” is exacerbating the novel coronavirus outbreak in one of the epicenters of the global pandemic, according to sanctions experts.

While U.S. sanctions formally exempt humanitarian supplies, sanctions-watchers say the reality is more complex. The breadth of the Maximum Pressure sanctions is extensive enough to dissuade firms, foreign governments, and banks from participating in the transfer of life-saving medical supplies, for fear of incurring secondary or third-degree sanctions from Washington. Reports of medical shortages followed very shortly after the Trump administration reimposed sanctions in 2018, long before a global medical crisis arrived.

But have the sanctions actually stopped any world government or company that wants to help Iran from doing so?

In October, the Trump administration established a channel, through Switzerland, to ease payments for Iran’s importation of food, medicine, and other humanitarian supplies. That operation began in late January, coincidentally around the time the World Health Organization declared COVID-19 a global public health emergency. “A big part of our Iran strategy from the very beginning is standing with the Iranian people instead of standing with the regime,” the State Department’s Iran special representative, Brian Hook, said at the time.

Asked about the sanctions’ impact on the Iranian coronavirus outbreak, a Treasury Department official said the administration “encourage[s] companies to use the recently established humanitarian channel in Switzerland.”

But those who follow the Iran sanctions closely say that the Swiss channel isn’t going to be sufficient. Sanctions make it difficult for Iran to access its foreign currency reserves held in banks in countries that purchased Iranian oil. “You can have a channel, but no foreign currency to pay through it,” said Esfandyar Batmanghelidj of Bourse & Bazaar, which tracks the Iranian economy.

“The Swiss channel is a good development, but because it funnels payments through a single Swiss bank, BCP [Banque de Commerce et de Placements], it isn’t useful to companies that don’t maintain accounts at that bank. Moreover, the Swiss channel has probably the most onerous due diligence and disclosure requirements of any payment channel ever created for Iran. So setting up to work through the channel, though possible, isn’t going to cut it at this time of emergency,” Batmanghelidj explained.

Ah, the bolded sentence in the last paragraph explains it all. It is certainly more difficult for Iran to get supplies, because the US wants to make sure that any aid is used specifically for helping people and not going towards nuclear research, missile development or funding Hezbollah. So there are a few more hoops to jump through. For saving people’s lives, the hoops are worth jumping through. And, frankly, who isn’t jumping through hoops to get what they need nowadays?

These “experts” are really against sanctions altogether, so instead of pointing out that Iran can get what it needs, they are saying flatly “it isn’t going to cut it.”

I see little to nothing that stops Iran from getting needed medical supplies. I do see people who were always against any sanctions on Iran using the coronavirus as an excuse to pressure the US to lift them.