From Robert Mackey in The Intercept:

NEW LEGISLATION PROPOSED by Rep. Betty McCollum, a Minnesota Democrat, would ban Israel from using any of the billions of dollars in military assistance it receives from the United States every year to pay for the detention, interrogation, or torture of Palestinian children living under Israeli military occupation in the West Bank.

McCollum’s bill, HR 2407, would amend the Foreign Assistance Act to prohibit funding for the military detention of children in any country, including Israel. The proposed law would also provide $19 million a year to American, Israeli, and Palestinian nongovernmental organizations to monitor the treatment of children detained by Israel’s army and offer physical and psychological treatment.

This bill is heavily influenced by “Defense of Children International – Palestine,” which is promoting the bill on its website. It appears that McCollum worked with DCI-P to craft the language of the bill. Indeed, the bill quotes from a DCI-P report to “prove” how Israel mistreats children:

The nongovernmental organization Defense for Children International Palestine collected affidavits from 739 West Bank children who were detained between 2013 and 2018, and concluded that 73 percent of the children endured physical violence following arrest…

We’ve looked at DCI-P before. It’s methodology is to interview these children with leading questions and to prompt them to answer what they want. They almost admitted this in previous reports, saying that first they seek out people to write affidavits, and then “Lawyers and human rights documentation professionals reviewed testimonies and other documentation for accuracy and assessed any gaps that required further research.” – meaning if there were problems with the “testimony” they would try to fit the evidence to their preconceived notions.

We know that DCI-P does not adhere to the “UN standards” they claim to use for interviewing people. During the 2014 war, it ludicrously claimed that the IDF kept a 16-year old son of a Hamas terrorist for five days to go, alone, into Gaza houses to look for Hamas tunnels and to dig for them with his bare hands. These were all obvious lies compounded by his father saying that the family disposed of the too-large clothes that the IDF supposedly gave him and “forgot” to take photos of his many injuries at the hands of the Israelis. (The New York Times reported this as fact, too.) These are laughable lies.  UN standards for interviewing include being skeptical of what people say and how to corroborate the stories. DCI-P prompts or believes anything that makes Israel look bad.

In addition, DCI-P has listed children known to have been killed while involved in terror attacks as being innocent, and to count those killed by Hamas rockets as being killed by Israel. They know that some of the children they count as innocent victims are terrorists themselves – they’ve admitted it on Palestinian TV – but their official  reports never mention that.

In other words, DCI-P reports have nothing to do with reality.

It would be bad enough if DCI-P was merely another NGO with dubious methodology whose entire purpose is to smear Israel. There are lots of those. But DCI-P is far worse.

DCI-P is associated with the PFLP terror group.

NGO-Monitor has documented many workers for DCI-P who were also officials of the PFLP. For example, here is DCI-P General Director Rifat Odeh Kassis addressing PFLP and DCI-P member Hashem Abu Maria’s memorial service in front of the PFLP flag and pictures of the group’s founder, George Habash: 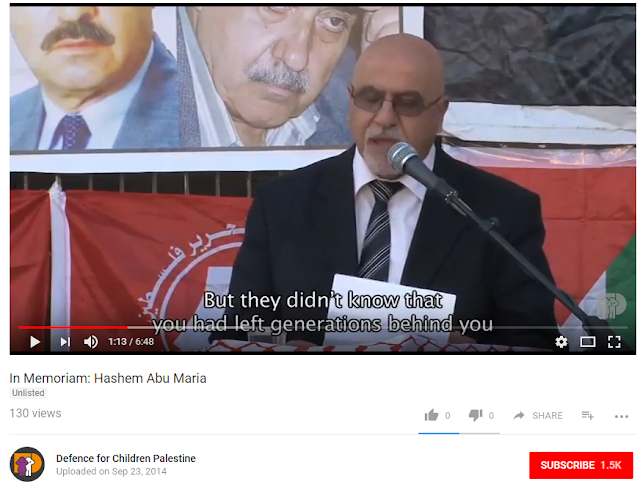 HR 2407 doesn’t just rely on bogus research by a NGO with known terror ties. It wants the US to give millions of dollars to that NGO!

FUNDING.—There is authorized to be appropriated not less than $19,000,000 each fiscal year to the Secretary of State to be made available to nongovernmental organizations from the United States, Israel, or the Occupied Palestinian Territory for the following purposes:
(1) MONITORING HUMAN RIGHTS ABUSES ASSOCIATED WITH ISRAEL’S MILITARY DETENTION OF PALESTINIAN CHILDREN.—
(A) IN GENERAL.—Nongovernment organizations with human rights experience are eligible to receive funding under this subsection.
Such funding shall be used to monitor, assess, and document incidents of Palestinian children subjected to Israeli military detention, including interviews with victims, family members of victims, relevant community members, health care providers, legal advocates, civil society monitors, and Israeli military officials.

This is exactly how DCI-P describes itself! The rest of the description of the role of these “NGOs” – annual reports showing affidavits from children – shows that DCI-Palestine is the only organization in the world that adheres to the requirements of the bill.

A US member of the House of representative, Betty McCollum, is introducing a bill to give millions of dollars annually to a fake NGO, associated with a US-designated terror organization, that knowingly and consistently lies in its reports.

This is scandalous and sickening.