Further to my previous article, there have been a few noteworthy changes to the scheduled event. 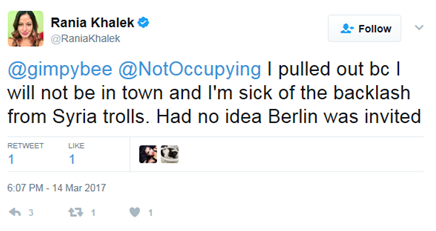 Khalek is referring to Greta Berlin, notorious anti-Semite, co-founder of the Free Gaza Movement, and frequent boarder of “freedom flotillas” to Gaza.  Berlin has even been criticized by Ali Abunimah of the Electronic Intifada for posting Anti-Semitic propaganda. Imagine that.  This week, she also invited our very own “Holohoax” white nationalist Jimmy Fry to her hate corner at the event. Jimmy of course accepted her invitation. 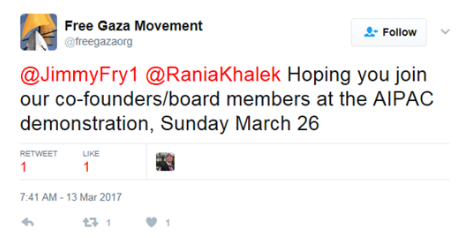 After exposure, an exchange on Twitter ensued. The @freegazaorg account [which Greta is said to be handling] sent a picture of a currency bill. The bill says “Palestine” on it in English, Hebrew, and Arabic. Of course, being as ignorant as we are, we all believe that since it is emblazoned with the word Palestine, that must mean it was issued by the sovereign Arab Palestinian state in 1939. Unfortunately for Greta, she isn’t very detail-oriented. Had she noticed the signatures on the currency, she would have read Sir P. Ezechiel – Sir J. Caulutt – and H. Downie, all British members of the Palestine Currency Board for the British Mandate at the time. These names are a far cry from Al-Mohammed or Al-Husseini.
I explained that the bill was issued by the British Mandate and that it was in circulation until 1947. Prior to that, the currency was the Turkish Lira under Ottoman rule. The response? A pathetic “you’re paid by the Israeli government” and the usual block. 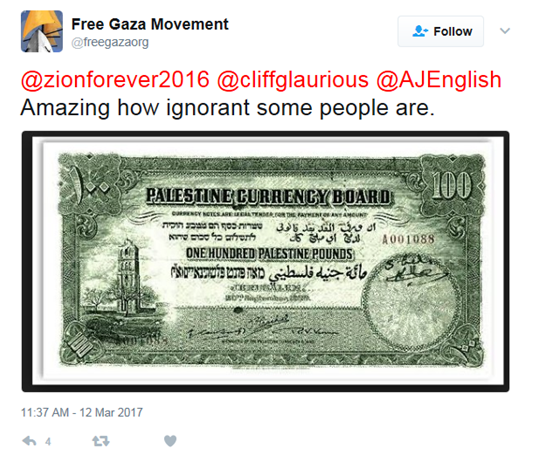 So it’s safe to assume that Khalek backed out because Berlin and other anti-Semites plan to attend the event. The backlash she receives daily for supporting Assad, as well as the talk cancelled by BDS earlier in the month, was enough to make her think twice. Equally interesting is that your usual “anti-Zionists” starting lashing out at the event organizer, Abbas Hamideh.

One of those is the one and only Gary Spedding, a proud supporter of BDS and anti-Zionist. The other is the notorious Noa Shaindlinger who supports Hamas and claimed to be affiliated with the terrorist organization PFLP.

She was even called a Zionist and “Controlled Opposition” by non-other than Hamideh sidekick and number one David Duke fan Jimmy Fry, who will also attend the event. 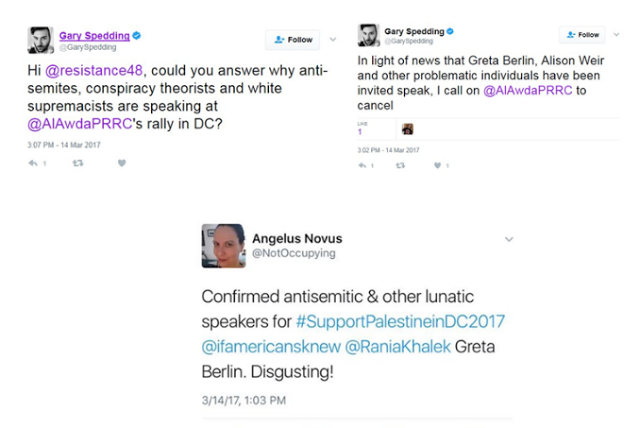 As for Hamideh, he has taken to Facebook to criticize the Al-Awda members who urged him to tone it down. He also referenced to the article I wrote and “congratulated” the traitors, saboteurs, and gatekeepers who have officially changed sides – and are now with AIPAC. Then Hamideh wrote another post claiming that anti-Semites and white nationalists will not be invited to the event. This of course is a lie. 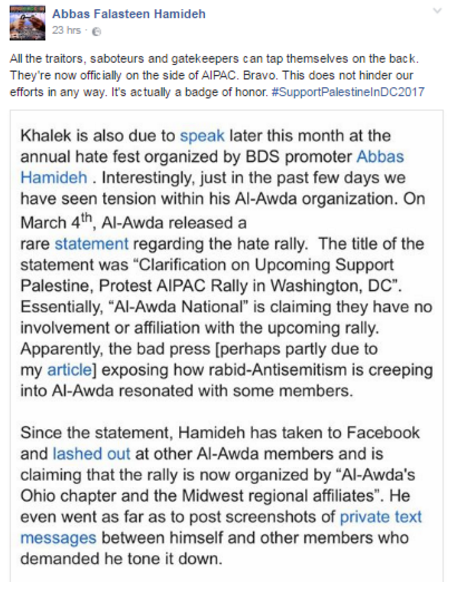 As of this moment, here are some of the speakers and attendees of the event. Reach your own conclusions as to whether BDS is becoming a haven for rabid anti-Semitic activity.

Alison Weir
Promoter of “Jewish Power” and “Organ Harvesting” anti-Semitic blood libels.
Shunned by Max Blumenthal and JVP.
Anas Amireh – Event Organizer
Promotes car ramming attacks by terrorists.
Jimmy Fry
Holocaust denier – “Auschwitz Lies”.
Makes jokes about Jews making good lampshades.
In conclusion, and as I have stated repetitiously, BDS is in shambles in terms of its leading activists, who are not aligned with one another. Expect to continue seeing this type of mud-slinging on social media as more and more anti-Semites join the “peaceful movement” known as Boycott, Divestment, and Sanctions.