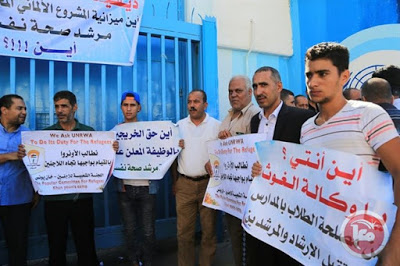 Hundreds of employees of UNRWA, the UN agency responsible for providing services for some five million Palestinian refugees in the Middle East, went on strike on Monday in the organization’s main offices in Gaza City, the occupied West Bank and East Jerusalem, protesting the UNRWA adminstration’s failure to meet their demands regarding wages and unfilled job vacancies.

Head of the employee’s union Suheil al-Hindi told Ma’an that about 1,000 employees who work in the main headquarters in Gaza City went on strike Monday, adding that the “biggest protest” would take place on Tuesday as local employees in all UNRWA’s office in the northern Gaza Strip would go on strike and would take to the streets.

Talks between the union and the UNRWA’s administration have been frozen, he noted, and more protests would come if the demands of the union were not met.

Hundreds of UNRWA employees launched a one-day strike and protested last week in front of the UNRWA headquarters in Gaza City over the same unmet demands.

Al-Hindi has previously accused the UNRWA administration in the past of not filling in hundreds of vacant positions, claiming the UN agency “deliberately puts off hiring employees in order to win some time and save money at the expense of refugees.”

The union, according to al-Hindi, has also demanded that UNRWA increase salaries to reflect the high cost of living and to stop reducing services the organization offers to Palestinian refugees.

UNRWA’s director of operations in the Gaza Strip, Bo Schack denied on Oct. 17 that UNRWA had reduced any services to Palestinian refugees despite the severe funding shortage.

“UNRWA is exerting huge efforts in Gaza and there have been no reductions in services at all,” Schack said during a news conference at UNRWA’s headquarters in Gaza City, when he claimed that the total number of UNRWA employees had in fact increased.

If you follow the Twitter accounts of spokesperson Chris Gunness, the aforementioned Bo Schack, UNRWA head Pierre Krahenbuhl, UNRWA-USA and even UNRWA itself, you would have no idea that UNRWA employees have been striking on and off for two weeks.

This is the “transparency” that UNRWA shows the world that has given it billions of dollars.

The bigger issue, of course, is that UNRWA cannot possibly continue to get funding indefinitely as long as its definition of refugees ensures that the number of people it supports will forever grow with no possibility for those refugees to become non-refugees, even when they become citizens of other countries.  UNRWA was intended to be a temporary agency that would exist only until refugees found a permanent home, but Arab refusal to make them citizens coupled with UNRWA’s acquiescence to Arab demands to use the refugees as anti-Israel pawns has turned the agency into a huge waste of money with generations of Arabs who feel entitled to free services for their own descendants, forever.

In fact, that is the reason UNRWA doesn’t want to talk about the strikes or other protests that erupt regularly from the people that get free aid and jobs from the agency. If anyone looks too closely, they see that the agency cannot survive without their annual begging for “emergency “funds. Something is going to break, but rather than address the problem, UNRWA wants to keep sweeping it under the rug for as long as it can keep raking in the cash.