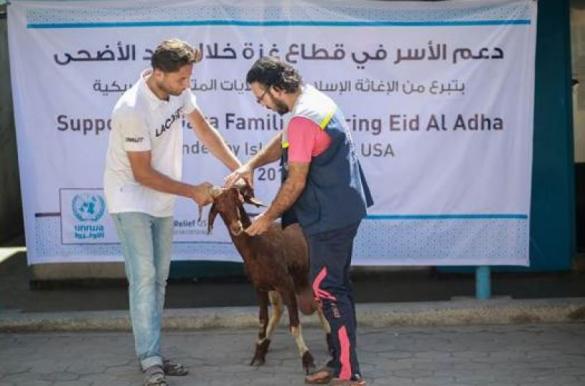 UNRWA announced that it distributed 896 live sheep to Gaza families for the occasion of Eid al Adha this year.

These sheep are slaughtered by amateurs. In fact, under Islamic law it is preferable that the owner of the animal be the one who slaughters (“sacrifices”) it, ensuring that the animals will die a horrible and painful death. (It is permissible for the owner to hire a professional as long as he witnesses the slaughter, but that is not the best way to fulfill the obligation.)

Videos from previous years shows young men from Gaza stabbing animals to death with short knives, often in large crowds, and it takes many minutes for the animals to succumb. Hamas does not enforce any laws on sacrifice, which often happens in the middle of the street. The UNRWA sheep will undoubtedly be slaughtered in the same crude and cruel way under sickening, dirty conditions. (They were donated by the US branch of Islamic Relief Organization. The UK-based organization is associated with the Muslim Brotherhood.)

Today is the first day of the three day festival, so there will be more horrific videos. Today a video of a frighetned bull that ran through a Gaza street before it was recaptured. was shared on social media, but not its subsequent slaughter.