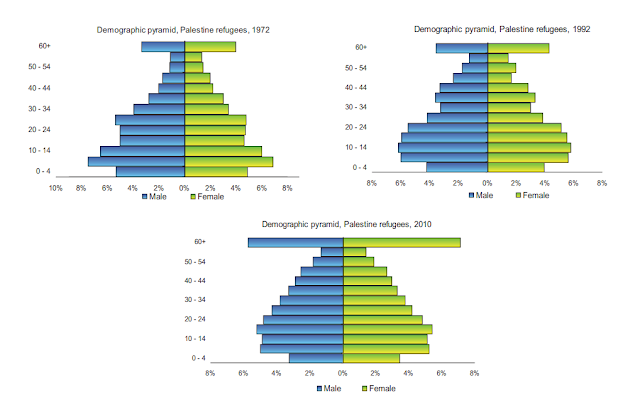 I found this footnote buried in the 2012 UNRWA and Youth background document at the UNRWA site:

The analysis in this section is based on UNRWA’s registration data, which tends to over-estimate the de facto refugee population in each field. Registration with UNRWA is a voluntary process. Individuals who move overseas, either permanently or on a temporary basis, may remain registered. Further, deaths tend to be under-reported, as do the numbers of those under five.

The 2010 UNRWA Annual report of the Department of Health is slightly more explicit about why UNRWA has no idea how many of the people it tracks may have died:

The demographic pyramids are difficult to analyse due known distortions related to a delay in the registration of new-borns leading to a smaller 0-4 age group estimation and the lack of a  compulsory death notification system in the Agency leading to a possible over-estimation of the over 60 age group.

At the top of this page are the pyramids they are talking about. Note how much the over-60 population has increased as a percentage of population between 1992 and 2010, even though the birth rate has been so high.

The only thing that can explain this is that Palestinian recipients of UNRWA aid, like their parents and grandparents, don’t report the deaths of relatives because this way they get more free stuff.

UNRWA, which claims to be an efficient agency that is not at all wasting international funds, has somehow over 70 years refused to implement any actions to actually keep track of the number of actual people under its care. In fact, in every annual health report the agency notes that “deaths may be under-reported.”

UNRWA knows this – and doesn’t do anything about it. Because the more people it can claim as “refugees,” the more money it can demand from the international community.