The first official census of Palestinian refugees in Lebanon has revealed that there are 174,422 Palestinians now living in Lebanon, a figure almost two thirds less than previously estimated.

The Palestinians — both original refugees and their descendants — were believed to number about 450,000 but tens of thousands emigrated from Lebanon in over the past decades, seeking better opportunities.

The census released Thursday was conducted by the Lebanese Central Administration of Statistics and the Palestinian Central Bureau of Statistics.

Even though UNRWA knows how many Palestinians are in Lebanon and how many left, it claims that there are 450,000 “registered Palestine refugees” in the country – because it wants to screw the world out of more money.

I looked at this in 2012, when it was thought that there were still 260,000 Palestinians actually in Lebanon in a study that UNRWA itself funded – and buried. 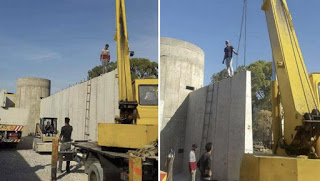 And in one case, the camp is literally surrounded by a brand new wall, complete with watchtowers, making it a literal prison. Now we know that the 100,000 Palestinians in this prison are more than half the total Palestinian population in Lebanon!

The plight of Palestinians in Lebanon is worse than in Gaza. No wonder two thirds of them have fled to wherever they could go.

Yet popular artists still perform in Lebanon without anyone complaining about “apartheid.” There are few articles and no conferences and no UN resolutions to help these Palestinians.