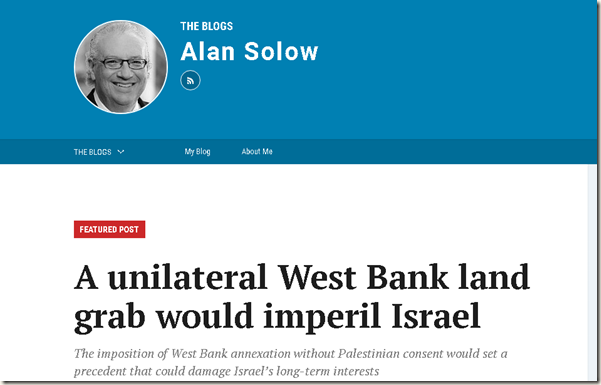 Alan Solow, a member of the Executive Committee of Israel Policy Forum and former Chairman of the Conference of Presidents of Major American Jewish Organizations, wrote a blog in Times of Israel arguing that Israel should not extend sovereignty on parts of Judea and Samaria for this reason:

No solution should be imposed on anyone or by anyone in the Israeli-Palestinian arena.

While American Jewish consensus around Israel policy has not always been easy to attain, this sentiment has stood for decades as the one universally accepted principle undergirding the quest for a resolution of the Israeli-Palestinian conflict – that it must be reached through bilateral negotiations between the parties. This precept allowed Jewish leadership to strongly urge American administrations of both parties not to attempt to implement their own vision of how to resolve longstanding differences between the two sides. Despite expressions of expected or preferred outcomes over the years, every President has endorsed this concept. This principle also allowed American Jewish leadership to credibly oppose unilateral attempts by the Palestinian Authority to declare a state or to otherwise take action without consent to change the status of disputed territories.

There is a fatal flaw in this logic: Palestinians have been acting unilaterally for decades.

They have called themselves the State of Palestine. They have joined numerous international conventions without any desire to actually enforce their words.

They have built illegally in Area C, with support from the European Union, creating facts on the ground and literally engaging in a “land grab.”

And, perhaps most importantly, they have taken the de facto veto power that the international community has given them, using exactly this logic, to make peace far more distant than it appeared to be in 2000.  They’ve said “no” to every offer, not to negotiate but to wait for others to pressure Israel to give up more concessions without compromising their own intransigent, extremist positions.

Solow makes it sound like this status quo can go on forever:

The fact is that nobody is credibly threatening Israel’s control over major settlement blocs in the West Bank which are generally recognized as likely becoming Israeli territory as part of a final status agreement. Israel’s continued control of these Jewish population centers is, as a practical matter, uncontested. The only reason to acquiesce to Israel taking them unilaterally now is to abandon the position that solutions are to be negotiated, not imposed.

Israel cannot play forever by these rules where Palestinians can do what they want and Israel has its hands tied by adhering to an artificial moral standard.  Continuing to wait for Palestinians to come to the table means that Palestinians can continue to act with impunity.

Extending sovereignty is not a land grab. It is the beginning of a disengagement. It is finally choosing borders. It is solving the demographic problem. It is staking a legal claim. It is sending a message that Palestinian intransigence will not be rewarded anymore. It is recognition that the world has changed since Oslo and Israel cannot be tied to an agreement that the Palestinians have abrogated since at least 2001.

Solow shouldn’t be warning Israel against doing what it must. He should be explaining to American Jewry why Israel must do it. And it is a serious failure in American Jewish leadership that he, and other leaders, cannot even figure this out for themselves.