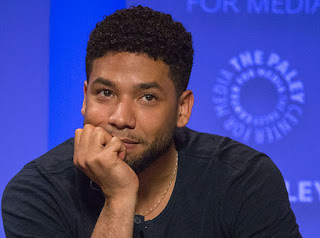 Geneva, June 13 – An international body that aims to look into allegations of violations of the Laws of Armed Conflict by the Jewish State has engaged to spearhead the effort a man with recent experience with allegations of disproportionate, illegal attacks.
The United Nations Human Rights Council today (Thursday) named Jussie Smollett, star of the TV series Empire, the director of a new probe into Israeli crimes against Palestinians at the border with the Gaza Strip and within the territory during the brief explosion of cross-border violence in April. A spokesman for the Council made specific mention of Mr. Smollett’s unwavering commitment to his narrative of victimhood even in the face of mounting evidence that he fabricated the entire incident and hired African immigrants to stage it.
“We find in Mr. Smollett a kindred spirit,” declared Bahrain council delegate Tashhir Aldam. “His unrelenting insistence that an attack took place even when hostile elements challenged his assertions is exactly what this panel looks for when it encounters allegations of Israeli crimes. The Smollett Commission, as it will be known, will forge ahead with its inquiry undeterred by accusations that it ignores evidence contrary to its predetermined conclusions, in keeping with the finest traditions of UN inquiries such as those conducted under Messrs. Goldstone, Falk, and others.”
A representative of the African-American actor thanked the Council for its recognition and conveyed the star’s aspiration to justify the organization’s faith in his abilities. “Jussie hopes to live up to the Council’s expectations,” stated Ali Latdam. “He is excited to partner with others in the world who have dedicated their lives and careers to bringing justice as defined by anti-Western, anti-Zionist, often anti-Semitic sensibilities, under which people of color – also defined by that group – bear perpetual victim status and cannot be expected to shoulder responsibility for their actions or situations, with the result that responsibility and guilt devolves onto whatever non-POC entities may be involved. In his case that was the Chicago police, or American society, or whichever accusation gets the most traction; in the case of the Human Rights Council it’s Israel, because Jews.”
Ambassador Aldam also noted the actor’s achievement in avoiding long-term career consequences for adhering to a disproved narrative. “We’re especially encouraged by Mr. Smollett’s ability to avoid permanently tainting himself with this episode,” he explained. “The UN can offer him an even more sympathetic environment in which to pursue blood libels, since the rigor of our methods does not approach that of the Chicago police department.”