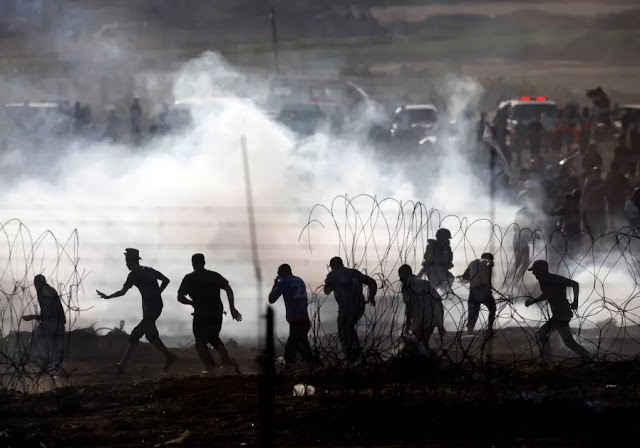 The UN Human Rights Council has issued a report about Israel’s conduct during the weekly riots in Gaza. Unsurprisingly, it cherry picks facts and assumes the lies of terrorist supporters are the truth.

The bias and lack of fact checking can be seen in the press release about the report:

“The onus is now on Israel to investigate every protest-related killing and injury, promptly, impartially and independently in accordance with international standards, to determine whether war crimes or crimes against humanity were committed, with a view to holding accountable those found responsible”, said Santiago Canton. “We also urge the organisers, the demonstrators, and the de facto authorities in Gaza, to ensure that the Great March of Return is entirely peaceful, as it is intended to be.”

“The Commission finds that these protests were a call for help from a population in despair”, Santiago Canton reminded.

The very title “Great March of Return” shows that the reason for the riots is the destruction of Israel by flooding it with hostile enemies, and any mention of the blockade of Gaza is peripheral at best to the events there. Most of the population that shows up stays far away from the border and they treat this as a social event, as Hamas buses them there. But the ones who approach the border are generally doing so at the behest of Hamas with the specific aim of generating “martyrs” and injuries for public relations purposes.

Of course none of hundreds of people interviewed by the UN – as we have seen in the past, often with Hamas members watching – will admit that Hamas bears any responsibility for the deaths.

Likewise, of course the Commission, which says that it investigated every single death, does not mention that some 80% of those killed were affiliated with terror groups and about one third were direct members of the military, not civilians under any definition. Yet the Commission does admit that at least 29 of those killed were members of specific military groups. It doesn’t bother to explain how such a high percentage of those killed, even according to their own statistics, would be military in what they consider a primarily civilian demonstration.

The Commission, whose members have no military expertise, is not equipped to rule on the military dimensions of the threat to Israeli forces and civilians by a breach in the fence, which was one of the focuses of the weekly riots for the first several months. However, the Israeli government did respond, from a legal perspective, as to the specific terms of engagement it uses and why. NGO Monitor, in its extensive submission to the Commission that was roundly ignored, translated the relevant sections of the Israeli court submission in a case brought by NGOs that claimed the IDF was violating international law and guilty of war crimes as the UNHRC is suggesting.

5. The factual basis of these petitions is, with all due respect, defective and lacking, both in terms of the content of the open-fire regulations and in terms of the nature and essence of the events under discussion, and is inconsistent with the actual situation. On this basis, the petitioners draw faulty legal conclusions, first and foremost with regards to classifying the events as supposedly “distinctly civil events”; however, as an examination of the actual situation shows, the events under discussion are part of the armed confrontation between a terror organization – Hamas – and Israel.

6. At the crux of the matter, open fire instructions given by the security forces in regards to the [border] barrier zone are consistent with Israeli law, international law, and rulings of the Honorable Court.

13. The distance between the two parts of the barrier [along the Gaza border] changes according to the topographical circumstances and ranges between 20 and 80 meters only. As such, a Palestinian that [crosses the first part] will arrive within a few seconds to the iron fence that is in Israeli territory.

14. Since its establishment, the barrier is designed to protect Israeli citizens and security forces from various threats, with an emphasis on infiltration of terrorists from Gaza into Israel. The barrier is located just hundreds of meters away from a number of Israeli towns and just dozens of meters away from IDF forces. Therefore, a breach poses, definitely from the riotous mob, a danger to both the citizens of Israel and to the soldiers.

18a. In this context, it should be emphasized that due to vulnerabilities in the barrier and the security significance of a breakthrough by a hostile Palestinian mob, the threat of the breakthrough creates, at times, a tangible, proximate danger to the lives and bodily integrity of both civilians and soldiers. And if this threat [infiltration] were to be realized, eliminating the danger (which at this stage would become immediate) would necessitate the use of live ammunition on a larger scale.

83. In this context, the respondents believe that the petitioners make light of the tangible, proximate, severe danger posed by rioting masses… The position of the respondents is that, the danger posed by a rioting mass of thousands of people is tens of times greater than that posed by a single person or a small group of people. Moreover, this danger becomes instantaneously immediate when the
masses reach their target, and preventing [the danger] at this later stage will require, from a tactical perspective, large scale live fire which the respondents are trying to prevent.

The UNHRC commission doesn’t even mention these points, let alone respond to them. It just makes assumptions that somehow the IDF has better means to protect Israeli citizens without saying what exactly those means are.

As is always the case with UNHRC reports about Israel, this is a hit job masquerading as a sober analysis.