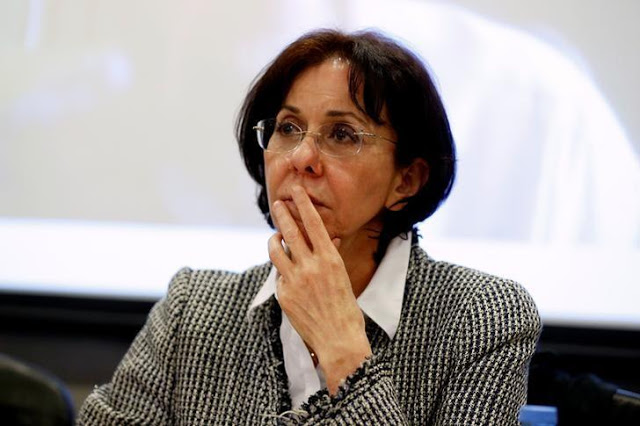 
The head of the United Nation’s West Asia commission resigned on Friday, after what she described as pressure from the secretary general to withdraw a report accusing Israel of imposing an “apartheid regime” on Palestinians.

The Economic and Social Commission for Western Asia (ESCWA), which comprises 18 Arab states, published the report on Wednesday and said it was the first time a U.N. body had clearly made the charge.

U.N. Secretary-General Antonio Guterres had asked the commission to remove the report from its website, a U.N. official said earlier.

“Based on that, I submitted to him my resignation from the United Nations,” Khalaf told a news conference in Beirut on Friday.

The report concluded “Israel has established an apartheid regime that dominates the Palestinian people as a whole”. The accusation – often directed at Israel by its critics – is fiercely rejected by Israel.

It isn’t surprising that Khalaf values slandering Israel over her very job.

In 2014, as ESCWA released a report on the challenges facing the Arab world, Khalaf effectively said that Israel shouldn’t exist and the Arabs should have destroyed it in 1948:

The effects of fragmentation have blighted all Arabs; observers cannot but notice the consequences of decades of division and underdevelopment. It is an explosive combination of threats and challenges, characterized by unconstrained foreign interference and human misery.

Foreign interference comes in various forms, such as violations of Arab rights and dignity, but its worst manifestation is the Israeli occupation of Palestine, the Syrian Golan Heights and Lebanese territories, in flagrant breach of all international conventions and resolutions.

The authors of the report claim that the damage caused by Israeli policies is not limited to occupation activities, but they believe that aggressive Israeli policies, including its support for discord aimed at establishing Arab sectarian mini-States and its nuclear programme that is not subject to international monitoring, pose a continuous threat to the security of Arab citizens in the region as a whole.

The most dangerous of these policies is Israel’s adamancy that it is a Jewish State, which violates the rights of both the Muslim and Christian indigenous populations and revives the concept of state ethnic and religious purity, which caused egregious human suffering during the twentieth century.

The report claims that Arab rights would not have been trampled; Jerusalem would not have suffered under Judaization policies, land confiscation and the expulsion of populations; and Muslim and Christian holy shrines would not have been desecrated if Arabs had stood united and coordinated their efforts, or at least met their existing commitments to joint defence.

Also in 2014, ESCWA released a series of 181 pro-Palestinian memes, many of which were absolute lies and half-truths.

For years, Khalaf used her platform to use the UN’s name to bash Israel way beyond what even the UN’s one-sided Human Rights Council had done. But now the UN has a head that actually cares to ensure that Israel is treated more fairly.