This paragraph is all the evidence you need that this agency is more interested in anti-Israel propaganda than truth. 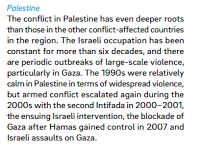 The conflict in Palestine has even deeper roots than those in the other conflict-affected countries in the region. The Israeli occupation has been constant for more than six decades, and there are periodic outbreaks of large-scale violence, particularly in Gaza. The 1990s were relatively calm in Palestine in terms of widespread violence, but armed conflict escalated again during the 2000s with the second Intifada in 2000–2001, the ensuing Israeli intervention, the blockade of Gaza after Hamas gained control in 2007 and Israeli assaults on Gaza.

If the Israeli “occupation” is more than six decades old, that means that according to the UNDP, it started in 1948, not 1967.

And this isn’t a typo. In another section, the UNDP says:

The Israeli occupation of Palestine is one of the longest lasting territorial occupations in modern history. It is also one of the most prolonged denials of self-determination to a people that has formulated its own nationhood against all odds. The freedom to live in dignity is palpably absent. Seven decades of occupation have exposed people in Palestine to deep insecurity, loss of  opportunities, desperation and profound political frustration.

Seven decades? Since before modern Israel was established!

This means that this UN agency is saying that all of Israel is occupied Palestinian territory, and Israel is illegitimate.

There are plenty of other lies you can see in just those two paragraphs (such as the idea that the second intfada was less than 2 years long.) And there’s lots more, like a sidebar on that same page that says how awful things are for Gaza children, for example, if you are less than six years old, there is a “10 percent chance that you have stunted growth due to prolonged exposure to malnutrition.” Yet elsewhere in the same report it shows that this is one of the best rates in the entire region, with many Arab countries suffering from 20%, 30% or (in the case of Yemen) 57% stunting!

The UNDP’s hate for Israel destroys the credibility it has in trying to actually help human development. It shows that bias and hate is part and parcel of the entire UN system, as we have demonstrated before.

And no one in Europe or the US gives a damn.