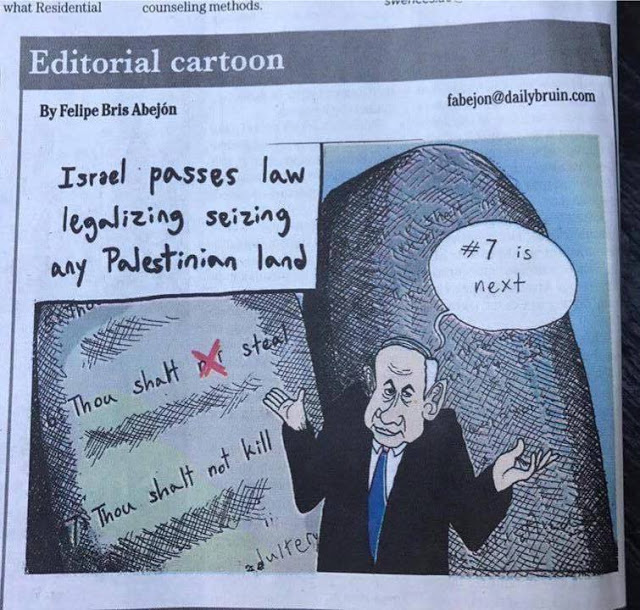 
Jewish groups condemned the Daily Bruin, UCLA’s student newspaper, Monday morning for publishing what they said is an anti-Semitic cartoon.

The cartoon, drawn by Felipe Abejón, depicts Israeli Prime minister Benjamin Netanyahu in front of the two pillars of the Ten Commandments. In the cartoon, the sixth commandment, “Thou shalt not steal” is written with the word “not” crossed out in red. Underneath, the seventh commandment, “Thou shalt not kill,” is written with Netanyahu shrugging in front of it saying “number 7 is next.”

“The point of the cartoon is that the Jewish faith does not have tenets of stealing, theft or murder and that the State of Israel is creating laws and has created a law that goes against that,” said Abejón, the cartoon’s creator. Abejón stated that the cartoon has no connection to Students for Justice in Palestine (SJP), although he was a board member for the group last year. Late Monday afternoon, the SJP board, in a submission to the Daily Bruin, condemned the cartoon and confirmed that it had nothing to do with the illustration.

“I didn’t intend to offend anyone,” Abejón said. “I stand by what the cartoon represents, I also stand against anti-Semitism and against intolerance against [sic] the Jewish people. I apologize to anyone who has been offended, but I still stand behind what this cartoon says politically.”

According to Jewish students, the religious undertones made the cartoon more than an anti-Zionist political statement — they made it anti-Semitic

Danny Siegel, President of USAC, UCLA’s student body government, released a statement on Facebook saying, “As a Jewish student at UCLA I am disgusted by the anti-Semitic claim in my school newspaper (Daily Bruin) that the Israeli government is purposefully using my Jewish faith to justify a policy matter.” He followed by writing that he, too, would be willing to criticize Israel’s government, but that stereotyping is unacceptable.

Rabbi Aaron Lerner, Executive Director of Hillel at UCLA, created a petition online and posted on Facebook, calling the cartoon an “Anti-Semitic form of Anti-Zionism in today’s Daily Bruin.” Many other student leaders and groups took to Facebook, outraged.

The Anti Defamation League (ADL) wrote in a response to the cartoon, calling it “deeply offensive, not to mention incorrect, to suggest that the Israeli government is willfully changing the tenets of the Jewish faith to reflect a policy matter.” They expressed a clear difference between criticizing Netanyahu’s government and “impugn[ing] core Jewish beliefs,” and that the types of stereotypes targeting “a specific religion should not be condoned.”

Tanner Walters, Editor-in-Chief of the Daily Bruin, cited a lapse of judgement in the editorial process that allowed the publication of the cartoon.  “This was a mistake that should have been caught at any point in the process, and it didn’t get caught,” he said. Walters said that the Daily Bruin has no formalized training process for religious, ethnic and cultural sensitivity training, and that editing teams rely on common sense to avoid mistakes of this nature.

The Daily Bruin released a letter of apology late Monday. “We strive to understand the community that we cover. So as part of our ongoing education, we are reaching out to local religious leaders to help our staff understand the historical context behind these kinds of hurtful images.”


Today the UCLA school newspaper, Daily Bruin, published an editorial cartoon which used the Jewish faith to criticize Israeli policy.
Not only is the claim against this policy blatant misinformation, (since the law in question does not legalize the seizing of land), but the use of the Ten Commandments to criticize this policy, and the suggestion that Israel is not only trying to legalize seizures of land but also seeking to legalize the murder of Palestinians (which is ridiculous), in relation to their Jewish faith, make this cartoon not only for anti-Israel propaganda, but also an anti-Semitic caricature. 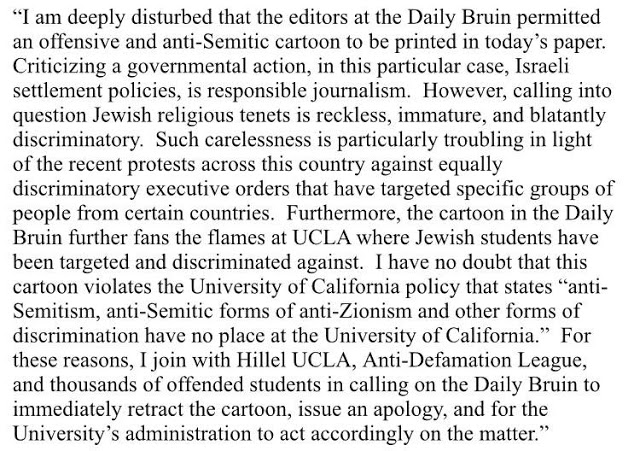 Here is the Daily Bruin’s apology.