It did not give details of the locations or causes of the collapses, but confirmed the two men were members of Hamas’s armed wing.

A security source said one collapse was in Gaza City, while the other was near the city of Khan Yunis. 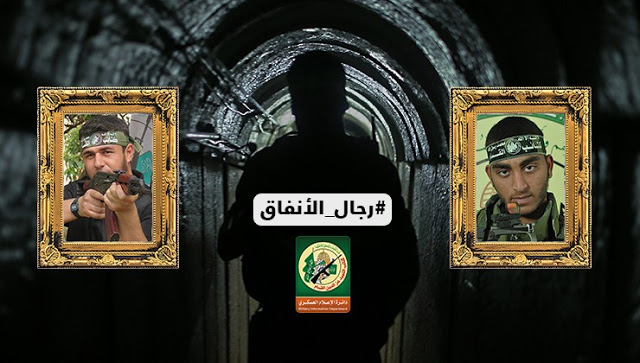 Their martyrdom came after the march of a great and honorable jihad, and after hard work and Jihad and sacrifice, we count them martyrs…
…The Mujahideen of the Qassam heroes  do not know how to rest, their silence is a jihad and they prepare for as long as the battle bears fruit, from training to manufacturing to digging tunnels of pride and dignity for the homeland. … bound by the promise of the Hereafter, which is inevitably coming on the day of our Mujahideen expel the faces of the Zionists, God willing,from the land…The blood of our martyrs will remain a shining light in the path of liberating Palestine and burning the occupiers until they are defeated from our land.

I don’t know exactly how Muslims officially become “martyrs,” but in general Hamas issued statements – sometimes even after fatal car accidents – declaring and praying that Allah accepts them as martyrs.

Two fatal tunnel collapses in one day is unusual, especially when in the summer (during heavy rains many tunnels collapse.)