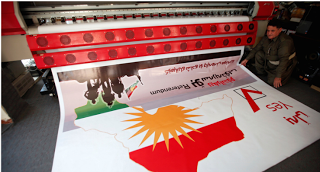 Several Turkish media outlets reported Sept. 13 that Kurdistan Regional Government President Massoud Barzani had reached a secret agreement with the Israeli government. The alleged deal involves the settlement of Jewish Israelis of Kurdish origin — a community of some 200,000 people — from Israel to the KRG after the independence referendum on Sept. 25.

Pro-government newspapers Yeni Akit and Aksam ran stories on their websites attributed to a magazine called “Israel-Kurd,” allegedly based in the KRG, that Israel will repatriate Kurds living in Israel to northern Iraq should Kurdistan become independent. The news website Internet Haber ran the news under the headline, “Barzani’s game revealed! Insidious Kurdistan plan.”

Another important pro-government outlet, Yeni Safak, commented that it may be Barzani, not Israel, who hopes to attract the 200,000 Jewish Kurds to Iraqi Kurdistan. Yeni Safak reported, “It is said that Massoud Barzani, who received support only from Israel during the referendum process, plans to strengthen his hand … with help from Kurds of Jewish origin who have prominent positions in Israel.”

The sensational if hard-to-believe story came amid another Turkish media blitz directed at Israel.

Even though the Al Monitor story makes it very clear that this report is ridiculous,  Arab media picked it up anyway – from Al Monitor – and is saying it is true! The Iraq News Network twists the story as if the different Turkish media outlets all reporting the same absurd rumor is proof that it has been independently confirmed by multiple media reports. It also implies that the 200,000 Kurdish Jews will help the referendum on independence pass, since they will presumably all move to Kurdistan in the next week or so.