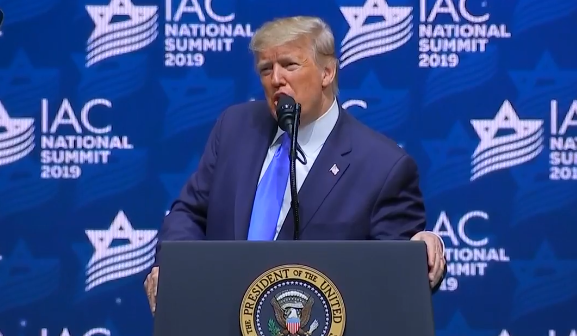 Here is just one of many reactions to President Trump’s speech at the IAC National Summit last night:

He so perfectly exposes how the pro-Israel industry is rooted in commodifiying, tokenizing and instrumentalizing Jews and how the JudeoChrsitian Zionist ethos is essentially antiSemitic https://t.co/LOP0YRbFfW

The audience at the IAC did not think that Trump’s speech was antisemitic. Even when he made jokes about how many of them are realtors:”You are brutal killers. Not nice people at all.” The audience recognized it as a joke from someone who loves them; the pundits are screaming “antisemite!”

Some commenters who are slightly more honest but still hate Trump are using a slightly newer trope – he’s not an antisemite, he’s a philosemite – and that is just as bad! Because as a philosemite, he mentions what he admires about Jews and those are used as proof that he is stereotyping them which is supposedly terrible. People who love Jews saying that Jews are good with money is somehow as bad as antisemites saying that Jews are money-grubbing misers.
In the end, Trump is a Rorschach test. If you have Trump derangement syndrome he is an antisemite or an evil philosemite. If you are honest you can see he loves Jews and Israel. (None of the critics are mentioning that Trump yet again unequivocally slammed antisemitism in this very same speech, nor that he movingly praised American Jews.)
It is possible to disagree with Trump’s politics and still see that he loves Israel and Jews. But the number of honest critics of Trump is very small.
There is plenty to criticize about Trump. One can even criticize how he seems to tolerate those on the Right who are antisemitic. But to claim that this speech is proof of Trump’s antisemitism shows much about the hate of the critic and nothing about Trump.