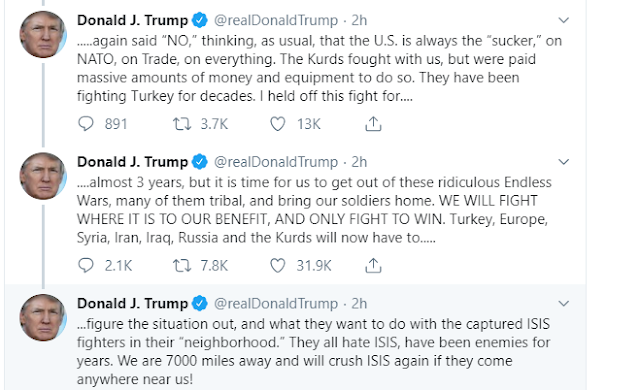 The White House announced late Sunday that Turkey will soon move forward with a planned military operation in northeast Syria, as U.S. troops who have been deployed and operating with Kurdish-led forces in the area began pulling back from their positions.

The decision sent shockwaves through the region and Washington, with U.S. officials telling Fox News that top Pentagon officials were “completely blindsided” and “shocked” by the order to pull back hundreds of U.S. troops, a move that effectively green-lights the Turkey operation. President Trump spoke with Turkey’s President Recep Tayyip Erdogan by telephone.

Some officials see the move as a betrayal of the Kurds, whom the U.S. supported against ISIS for years.

Speaking on “Fox & Friends” Monday morning, Sen. Lindsey Graham, R-S.C., called it an “impulsive decision” by Trump that would undo U.S. gains in the region and give ISIS fighters a “second lease on life.”

He tweeted: “If press reports are accurate this is a disaster in the making.”

…The decision to give Ankara the green light was seen by the Kurdish fighters as a major shift in U.S. policy. Over 11,000 mostly Kurdish fighters in the U.S.-backed Syrian Democratic Forces (SDF) have been killed fighting ISIS in Syria.

One U.S. commander who helped lead the anti-ISIS effort told Fox News the decision amounts to a propaganda victory for China and Russia, saying those countries can tell would-be U.S. partners that America will abandon them.

“No one will ever partner with us again,” the commander said.

As for Turkey’s intentions with the Kurds, the senior military officer said: “They are going to slaughter those cats.”

One of the problems with Obama was that he abandoned traditional allies and tried to ally with America’s enemies.

Trump is doing the exact same thing, no matter what justification he is using. Turkey is not America’s friend and the Kurds were tremendous allies in the fight against ISIS. Not to mention that their own national aspirations are far more justified than those of most stateless peoples.

If Trump can abandon the Kurds in a quick decision without talking to the experts first, he can abandon anyone.