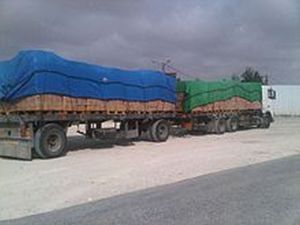 Kerem Shalom Crossing, August 2 – Logistics personnel handling the hundreds of tons of foodstuffs, commercial goods, medical supplies, and other essentials that move into the Gaza Strip each day from Israel remain oblivious to the fact that the Gaza Strip is under siege, with nothing allowed in or out, local sources are reporting.
Truck drivers, fork lift operators, and other cargo delivery and processing professionals on the Palestinian side of the facility handle hundreds of incoming truckloads of such goods and materials each day from Israel, receiving delivery and coordinating further distribution of the cargo throughout the coastal territory. However, not a single member of the staff at the facility, nor a single driver, clerk, or other functionary appears to know about the cruel Israeli siege that is stifling Gaza’s economy, causing shortage of medical and other crucial supplies, and threatening the entire population of almost 2 million Palestinians with starvation. Instead, they continue to process the importation of thousands of tons of goods per day to deliver, to supermarkets, warehouses, restaurants, hotels, hospitals, luxury boutiques, and other establishments that have imported the goods from or through Israel, as if no siege is underway.
“I don’t know how they can be so ignorant,” remarked Ken Roth of Human Rights Watch. “Don’t they get their news from the same sources as the rest of us, according to which Israel’s blockade and control of the border with Gaza are causing rampant malnutrition, power outages, and other disasters?”
The mystery of the workers’ apparent ignorance deepens when one examines official Palestinian rhetoric, notably that of the Islamist Hamas organization that runs the Gaza Strip. “There is no way they can be unaware of the barrage of ‘we’re under siege’ and ‘they are depriving us of basic necessities’ talk from Palestinian sources inside and outside Gaza,” observed Jacob Burns of Amnesty International. “It’s axiomatic that Israel’s policies are the root of all Palestinian suffering – the human rights industr- I mean community established that long ago. Its doubly confusing to have such people who must answer to the Palestinian leadership, owing to the nature of their jobs, not aware that they are supposed to be acting accordingly, not just receiving tons and tons of goods without so much as a mention of the deadly, sadistic, illegal siege.”
“In fact it’s so bad that Gazans have taken to desperate measures to assuage their own suffering,” he added. “It’s painful to watch.”