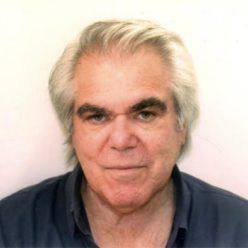 Remember Larry Derfner, the columnist who was fired from the Jerusalem Post for submitting an article that said that Palestinians murdering Israelis was a “right”? The JPost editor said that Derfner had written “hate speech.”

Naturally, Derfner found work writing for Haaretz, the Forward and +972.

And now….for the New York Times.

Because instead of being disgraced by showing such callous disregard for innocent Israeli lives, he is celebrated.

Derfner’s thesis for his NYT op-ed is just as fact-free as his justification for murdering Jews.

In this country, people have learned to accept that one war follows another, every two or three years. “An Inevitable Conflict in Gaza,” ran a headline in the daily newspaper Yediot Ahronot earlier this month. “With Lebanon no longer hiding Hezbollah’s role, next war must hit civilians where it hurts, Israeli minister says,” Haaretz reported a few days later.

What hardly any Israelis will consider, though, and virtually no influential voices in the West will publicly suggest, is that Israel — not Hezbollah in Lebanon, nor Hamas in Gaza, nor the government of President Bashar al-Assad in Syria — is provoking the next war. Counterintuitive though it may be to Israeli and most Western minds, Israel, not its militant Islamist or brutal Syrian enemies, is the aggressor in these border wars.

His evidence? Israel attacks weapons convoys from Syria to Hezbollah – advanced weapons that are illegal under UN Security Council resolutions. This, to Derfner’s mind, makes Israel the aggressor.

Derfner, who as far as I can tell has no expertise in either military or political strategy, performs his “analysis:”

Hezbollah and Syria are well and truly deterred, and if Israel were to simply let them be, they would have to be crazy to strike first. (Hezbollah tried that in 2006, killing two Israeli soldiers in a cross-border raid, and in the war that followed Israel taught Hezbollah and all of Lebanon a very harsh, lasting lesson.) But if Israel keeps rubbing their noses in their weakness — as Mr. Netanyahu is now doing — national honor at some point will compel them to hit back with force. The “inevitable” next war will begin.

It doesn’t occur to Derfner that these occasional Israeli raids pinpointing specific weapons convoys and terrorists are the deterrence, not memories of a war ten years ago.

Hezbollah and Hamas don’t want to start a war directly – but they do want to push what they do as far as possible. To prepare for the next war.  What other purpose do tunnels and advanced missiles aimed at Israeli targets have?

Derfner justifies Arab aggression as natural. You see, Arabs have honor that must be protected. They have no choice but to shoot missiles and send bus bombers to Israel. Besides the mention of honor above in the context of Syria and Hezbollah, Derfner invokes it to pre-emptively justify Hamas aggression:

Lately, militant groups in Gaza other than Hamas have been firing their rockets in Israel’s direction, typically hitting nothing but open space. In return, Israel has been blasting away at Hamas military targets. Hamas has been holding its fire, but as the military affairs commentator Alex Fishman wrote in Yediot Aharonot, that calm “may be broken as soon as Israel attacks and Hamas feels that it can no longer take the humiliation, or if an Israeli strike leaves too many casualties.”

What Derfner doesn’t tell the clueless New York Times readers is that Israel’s retaliation for ineffective rockets is to hit empty buildings and fields. Just as in Syria, the point is to remind Hamas that they must uphold their responsibilities – that Israel can just as easily hit much more valuable targets.

It is true that there is a war every few years – 2006, 2009, 2012, 2014. Each of those wars were started by outrageous actions on the parts of Hezbolah and Hamas that no nation on Earth would tolerate – and in fact, Israel has been very reticent to respond to the vast majority of outrageous actions by those parties.

If Israel would use the argument of “national honor” to justify attacks, Derfner would rightly castigate it for being cavalier in going to war. When Arabs invoke honor to justify attacks and military buildup, though, Derfner is all love and kisses for their cultural desire to protect themselves from humiliation.

Derfner looks at everything through the lens of his anti-Israel glasses while Hezbollah and Hamas are viewed through rose-colored lenses. Sure, Israel teaches and advocates peace in private and public, while the Islamists that Derfner is defending openly advocate murdering Jews literally every day in their media, schools and public statements. But Derfner, whose entire career has been built on bashing Israel, is obligated to try to convince everyone that Israel is the aggressor and the poor Hamas and Hezbollah militants just want their honor.

It is also notable that at no point does Derfner mention that Iran is who is behind everything happening in Syria and Lebanon, because he wants to ensure that Israel is perceived as the big bad aggressor and the terror groups as the victims. It is hard to do that when you remember that they are proxies for a regional superpower that pledges to destroy Israel.

Of course, the only criterion the New York Times looks for in their Middle East op-eds is that the author has something had to say about Israel.  Supporting facts are not necessary.