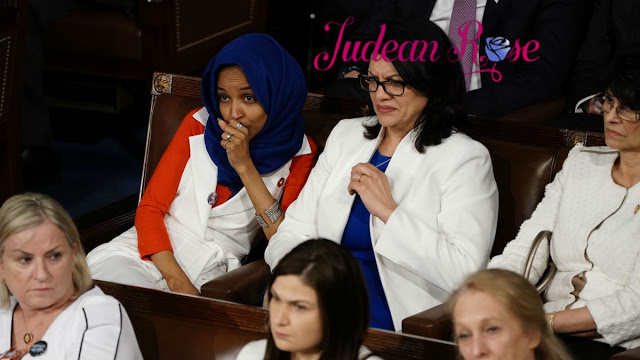 Ilhan Omar and Rashida Tlaib, two U.S. congresswomen with a penchant for making antisemitic comments and supporting antisemitic measures, are soon to visit Israel. When they arrive, we will have had several weeks’ warning. But there will be nothing we can do to stop the two from coming into our country and using the trip to hurt us. This is something we have seen before, as recently as during the Obama administration.

There is no reason to let them in. Israel has a perfectly good lawon the books denying entry to anyone supporting BDS, as these two congresswomen do. The final decision, however, was to allow the two into Israel, as announcedby Israel Ambassador to the U.S. Ron Dermer, “Out of respect for the US Congress and the great alliance between Israel and America, we would not deny entry to any member of Congress into Israel.”

Friends in America wondered how I felt about this: did I think something else should have happened, instead? It is a moot point. As a regular person and Israeli, I have no say in this, no voice, no power. I knew from the outset that it would be realpolitik that would hold sway. Prime Minister Netanyahu would not want to offend. He would want to give proper honor to the United States. So he would look the other way, bypass the law, and let them in.

In this light, what I wanted didn’t matter. I tried to avoid getting embroiled in further conversations on the topic. My friends were missing the point: this visit was going to happen.

Other friends did understand and asked what I thought about organizing a protest. I said, “We wouldn’t be able to get close enough to them.”

We’d be prevented by security, ours and theirs, and of course, all this would be under the guise of, well, security. As if holding up signs and showing up and chanting slogans were somehow dangerous activities. (I hope someone does organize a protest and I turn out to be wrong: that we won’t be prevented from taking a stand in view of the two congresswomen.)

I have tried not to think about it too much, about the women who are to visit: what a chutzpa it is; how there’s no way to bar their entry, these people who are saying my country has no right to exist, and that the Jewish people have no right to self-determination. The dynamic, as set into place by Omar and Tlaib with this forced visit, is to dominate the Jews as Muslims. They are making that happen.

Some have suggested that the trip will open their eyes. Those who suggest this are deluded. The two women are the enemy. The very purpose of the trip is to harm Israel and Israeli Jews. Like President Obama, they will run roughshod over Jewish and Israeli feelings.

It won’t matter how bad it gets. The two will do as they wish, go where they wish to go, because they, to all intents and purposes, are in charge. They are holding the reins. They reign. The Israeli Jews are infidels.

It is interesting that no reports have mentioned a firm date on which the two women will arrive. Tlaib’s family, according to an anonymous source, say that Tlaib and Omar will arrive on August 22. But the date was not announced or otherwise made public. (There is no doubt a reason for this. If we don’t know the arrival date, the congresswomen can, all the more so, keep us off-guard, simply for the sake of keeping us off guard.)

This is how the visit will go down: The women will assent to see the usual sights, tour Yad Vashem; take the helicopter ride that shows our slender waistline; and view the threats that surround us. Instead of being wowed over, when they make their statements to the press, the congresswomen will say something like: “No one denies the tremendous accomplishments of Israel or the sufferings of the Jewish people, and still, Palestinians have a right to self-determination and a state of their own, in Israel.”


“In Israel” is Code

“In Israel,” in this context, is code for “all of Israel,” and the suggestion is that Israel, in any shape or form is illegitimate, as the only indigenous people of the territory are the “Palestinian” Arabs. This is the latest talking point that progressives will be spouting in America after this trip: the main takeaway.

The talking point is of course, untrue. Jews can trace their heritage in the Land of Israel back to before Mohammed was born, and before there was an Arab people. The Arabs are indigenous to Saudi Arabia, perhaps. But not to Israel.
No matter. This will be the new line to regurgitate, what everyone will be saying ad infinitum: “No one denies these things, but still, Palestinians, and so forth.” Lather, rinse, repeat.
This dishonest narrative will be amplified by the media and accepted by the people, most of all by progressive JINO parrots who cannot think for themselves.

No Recognition for Jews as Indigenous

One thing is certain: during the press conference to be, there will be no recognition by the congresswomen of the Jewish people as the indigenous people of the territory. There will be no lip service to the fact that Arabs in Judea and Samaria have self-rule and freedom of movement within their territory, as so do the Arabs in Gaza. The two congresswomen will pretend that Arabs have the same rights as the Jews to the territory that is Israel and the same rights to a state. That state, of course, can only be “in Israel.”

If we have a voice as citizens of Israel, it is at the voting booth, our medium the ballot. In allowing these women to enter the country, Bibi will be breaking the Entry Law. This law says that anyone who actively supports BDS must be stopped from coming into our country, Israel.

At the highest level, our elected officials are expected to uphold the law. The law expresses the values of our society; realpolitik be damned. This bypassing of the law is something we should all keep in mind come September at the polls, no matter how it would have looked, had Bibi turned the two women away.