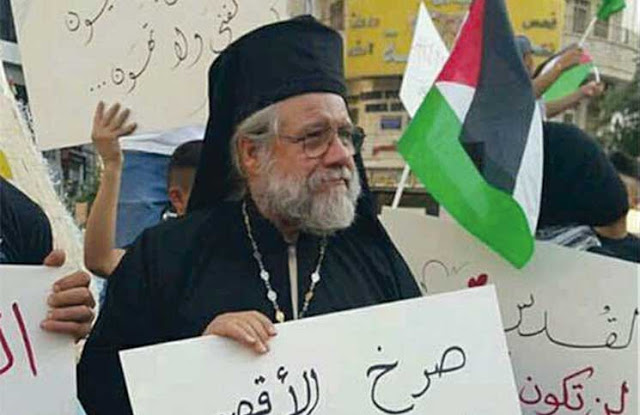 Archbishop Abdallah Julio Brunella of the Melkite Catholic Church in Jerusalem was interviewed by Al Quds. And true to form of all Christian leaders who count Palestinian Arabs as their subjects, he is unrelentingly anti-Israel.

We’ve seen this phenomenon before with the Palestinian Catholic leaders of various stripes.

Christians have been subjected to widespread persecution in Palestine. In Jerusalem today the occupation threatens the Christian presence and the migrations do not stop because of the lack of opportunities for life.
We must support the elements of steadfastness for Christians in Palestine. They are an integral part of the Ummah. The Christian belongs to his Arabism before his church and he is facing the struggle of existence as is the situation of the Arab citizen. There is a systematic Israeli policy aimed at emptying the land of Palestine from all its components. The suffering of Christians in Palestine is no less than the suffering of Muslims and is the main reason behind their growing emigration.

No, the reason Christians are fleeing is Muslims, but Brunella is too frightened to say so. So he blames Jews.

• Palestine is the cradle of Christ, the place of Christ’s crucifixion and resurrection, and the origin of the Christian religion to the world. The Christian roots in Palestine are as old as history, our Lord Christ was born in Bethlehem Palestine, and this blessed land is the land of all religions, and Christianity also has its roots in Palestine and on Arab land and authentic as Islam is authentic.
Hence, the relationship between Arab Christian and Arab Muslim is very important to the importance of history, and it is united under one slogan, to be or not to be.
Christianity is a dogma as it is Islam. It is very important to distinguish between religious affiliation and national belonging. There is a common past, a present and a future that is also common to us. Arab Christianity has its own destination and concepts. There is a malicious plan that targets all the Arab nation and aims to destroy the one nation.

Muslims hate Christians just as much as they hate Jews, but Brunella will never, ever admit it – because they own him.