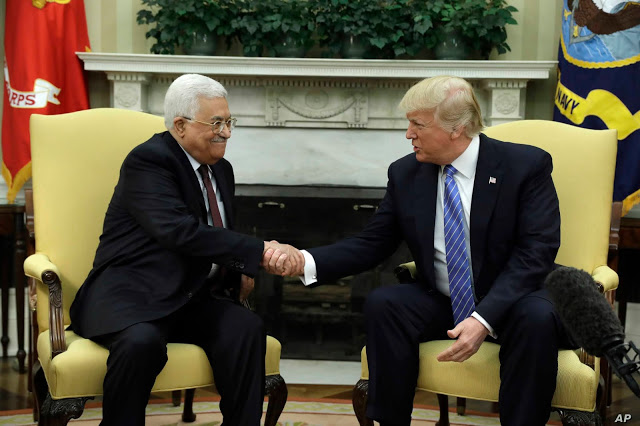 When he hosted Palestinian Authority President Mahmoud Abbas at the White House in May 2017, President Trump boasted of the ease with which he would achieve the Israeli-Palestinian peace that had eluded his predecessors in office.
“We will get it done,” Trump told reporters, saying that the task was “not as difficult as people have thought over the years.”
Three and a half years later, the promised peace seems further away than ever. Trump’s plan, crafted by son-in-law and adviser Jared Kushner, landed with a thud in February and all but disappeared.
Instead, Trump moved the goal posts, last week claiming to have succeeded with a deal that others “were unable to make . . . for 40 years.”

The writers, Karen DeYoung and Steve Hendrix, are skipping over some crucial parts of what happened between May 2017 and now.

Trump always said that he wasn’t going to force any agreement – that Israel and the Palestinians both have to want to make an agreement, and only then is peace possible.

When Trump announced that the US recognizes Jerusalem as the capital of Israel in December 2017, he specifically said that this was simply a reflection of reality, not a position of the final status of Jerusalem. It was ending the idiotic and unconscionable US position that Jerusalem might still become an international city. The option for east Jerusalem being capital of a Palestinian state was not changed at all.

But the Palestinian reaction was fierce and insulting to the US.

As a result, Trump in February 2018 said he is “taking Jerusalem off the table.” But even when he said that, he criticized both the Palestinians and Israelis as not being truly interested in peace:

The PLO continued to lash out at the US. And the US, instead of coddling them as was done in the past, reacted in kind – by shutting down the PLO office in Washington in September 2018:

“We have permitted the PLO office to conduct operations that support the objective of achieving a lasting, comprehensive peace between Israelis and the Palestinians,” State Department spokesperson Heather Nauert said in a statement Monday.

“However, the PLO has not taken steps to advance the start of direct and meaningful negotiations with Israel,” she added.

The PLO reactions to both the economic peace plan presented in Bahrain in June 2019 and then the January 2020 Peace to Prosperity plan – which pushed a path to a contiguous Palestinian state that again realistically dealt with Israeli communities – were similarly and summarily rejected with insults and no counter-offers.

Whether one agrees with the US administration’s positions, one cannot ignore the incitement and intransigence of the PLO which prompted the White House to move away from considering the PLO a serious peace partner. The Trump administration is transactional, and it treats other nations the way that they treat the US as opposed to the traditional way of begging for acceptance.

The PLO chose the path of making itself irrelevant, and the entire history of the Trump team’s interactions with them shows that everything they did was a reaction to PLO decisions. This includes facilitating peace directly between Israel and Arab states.

It is not much different from George W. Bush’s reaction to finding out that Yasir Arafat lied to his face about the Karine A weapons ship, denying anything to do with it when Israel showed Bush Arafat’s signature was on the paperwork. Bush stopped talking to Arafat after that, later writing “Arafat had lied to me. I never trusted him again. In fact, I never spoke to him again. By the spring of 2002, I had concluded that peace would not be possible with Arafat in power.”

So, no, Trump didn’t move the goalposts. He is optimizing peace in the Middle East given a PLO that wants to be the roadblock to peace. No one could have done any better, and the WaPo criticism is based on hate of Trump rather than any objective analysis.