TOP NEWS
http://elderofziyon.blogspot.com/2017/10/the-washington-posts-fake-news-about.html
The Washington Post markets its “World Views” column as “smart analysis of the most important news,” and when you hover over “Analysis,” a pop-up tells you it means “Interpretation of the news based on evidence, including data, as well as anticipating how events might unfold based on past events.” But Ishaan Tharoor’s recent column about “Palestinian Gandhi” Issa Amro is just lazy journalism promoting the kind of Palestinian propaganda that can be read on countless websites for free: like other journalists before him, Tharoor made do with telling his readers what Amro told him – all backed up by what supporters of Amro would say… 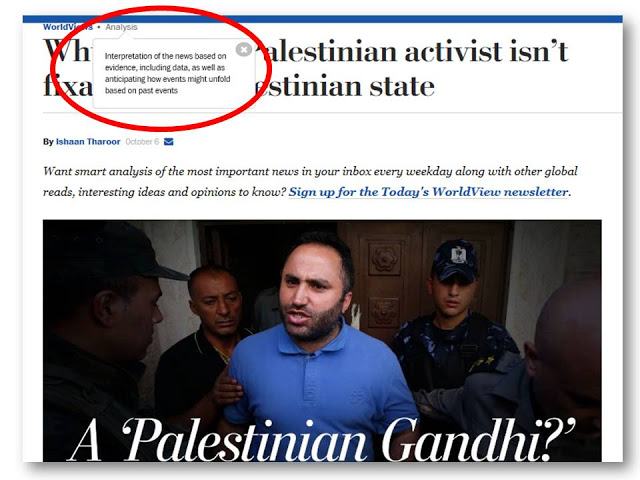 So I decided to do the research Tharoor couldn’t be bothered to do, and you can check out the resulting documentationat Legal Insurrection. It is, admittedly, a longish post, but the title gives it all away: “Issa Amro is no ‘Palestinian Gandhi.’”
As the documentation shows, Amro has longstanding and close relations with several notorious professional anti-Israel activists who earn their living by promoting the 21st century version of the Nazi slogan “The Jews are our misfortune” – which is: “The Jewish state is our misfortune.” Moreover, Amro has apparently never condemned Palestinian terrorism, and he enjoys the full support of activists who are not only outspoken apologists for Hamas, but who have repeatedly voiced support for the terror group. Amro himself has issued repeated predictions and calls for another intifada. Particularly noteworthy is the timing of his call for an intifada in May 2014, just four weeks before the abduction and murder of three teenaged Israeli students by Hamas terrorists from Amro’s hometown Hebron. Back then, Amro boasted about having a ‘secret plan’ for a “smart intifada.” Then there is his reported defense of a member of Hebron’s Qawasmi clan – which is prominently associated with Hamas and includes two of the perpetrators of the 2014 kidnapping and murder case. In addition, there is quite a bit of evidence indicating that Amro’s group Youth Against Settlements (YAS) is supportive of terrorism and is eager to incite Muslim religious passions that are often an important motivation for Palestinian terrorists.
I think it’s unlikely that the Washington Post’s “Foreign Affairs Writer” Ishaan Tharoor would be surprised by any of this. Given the focus of his writings, he is presumably aware of the fact that so-called “pro-Palestinian” activism is more correctly described as anti-Israel activism, because the goal of most groups and campaigns is the replacement of the world’s only Jewish state with yet another Arab-Muslim majority state.
This makes the title of Tharoor’s piece so devious: he pretends to explain “Why a leading Palestinian activist isn’t fixated on a Palestinian state” – but could he name any Palestinian or “pro-Palestinian” activist who is “fixated” on a Palestinian state that would peacefully coexist with a Jewish state of Israel? Indeed, it seems Tharoor didn’t even bother to ask Amro directly if he would support a negotiated two-state solution – or maybe he did, and Amro’s emphatic “no” is reflected in Tharoor’s opening paragraph, where he sneers at the failure of Washington’s “diplomats, politicos and wonks” to realize that “on the ground in the occupied Palestinian territories, the two-state solution is a mirage.” [Bold original]
And of course, it’s all the fault of the “right-wing government of Israeli Prime Minister Benjamin Netanyahu” and “Israeli settlers” who “continue to expand across the West Bank.” Since Tharoor’s “analysis” is supposedly “based on evidence, including data,” he surely knows that this relentless expansion “across the West Bank” over five decades has resulted in settlements that take up about 2% (according to data) to 4% (estimate) of West-Bank territory.
Then there’s this astonishing passage – with the first sentence bolded in the original:
“The repeated refrain from Netanyahu and other Israeli officials is that the main obstacle to peace is Palestinian violence. But that argument falls short with people like Amro, whose tactics include sit-ins and the monitoring of settlers and Israeli security forces with video cameras. ‘They see us as the main enemy,’ he told me. ‘They don’t know how to deal with nonviolence.’
‘It is particularly people like him that Israel is most uncomfortable with, more than the militant carrying the weapon,’ said Yousef Munayyer, executive director of the U.S. Campaign for Palestinian Rights. ‘People often ask, ‘Where is the Palestinian Gandhi?’ You’ll often find many of them either in Israeli prisons or shot or killed or otherwise oppressed from engaging in activism.’”
Right, of course: the Palestinians are really a people of Gandhis, all imprisoned or shot or killed for no reason whatsoever by a monstrously vicious Israel  – “evidence, including data,” about Hamas and longstanding broad popular support for terrorism among Palestinians be damned.
So let’s conclude by looking at how Tharoor ends his piece:
“’It’s not about two states. It’s not about peace,’ Amro said, referring to the aims of Netanyahu and his allies. ‘They believe that it’s all for them.’”
Well, here’s a clue about what Amro believes: in a recently posted tweet, Amro’s group YAS claimed that “40,000 Israeli settlers storm into Ibrahimi Mosque in Hebron.” They repeated the same claim a day later, linking in both tweets to an articleon the Islamist website MEMO, which often serves as a mouthpiece for Hamas. 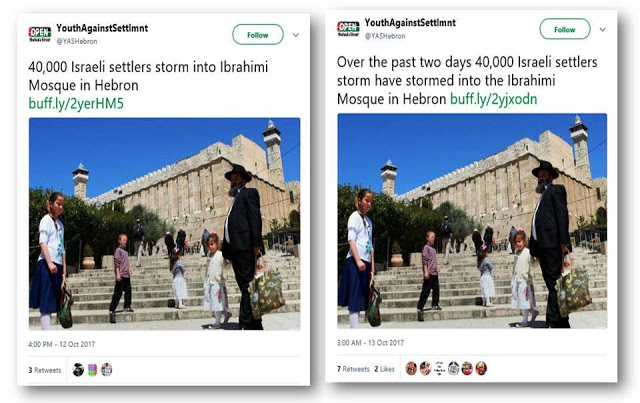 The article features a photo of a religious Jew accompanied by a few children – which is presumably meant to illustrate how the “40,000 Israeli settlers” storming the “Ibrahimi Mosque in Hebron” looked. Why religious Jews with children would want to “storm” any mosque is probably not a question that bothers the audience cheering Amro and YAS; but Amro and his group know of course that long before there was an “Ibrahimi Mosque,” the site was revered by Jews as the Cave of Machpelah (Tomb of the Patriarchs), and it is considered Judaism’s second holiest site after the Temple Mount in Jerusalem. Yet, most of the site is controlled by a Muslim body (waqf), while Jewish access to the site is severely restricted.
As is to be expected, the MEMO article Amro’s group links to is trying very hard to present the Jews visiting the site to mark the Jewish holiday of Sukkot as desecrating a holy place that rightfully belongs only to Muslims. According to MEMO, “The Director and Head of the Ibrahimi Mosque, Sheikh Hafthi Abu Esnaina, condemned the incursions. He stressed that Israel is encouraging the Judaisation of Palestinian religious sites. ‘The Ibrahimi Mosque will always be a holy site for Muslims only,’ he insisted.”
Sounds an awful lot like “They believe that it’s all for them.”