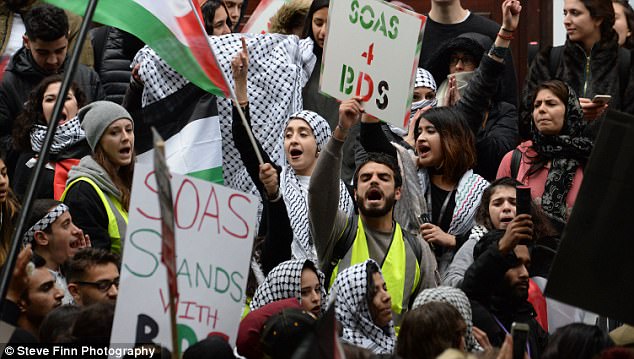 The Daily Mail reported on the protest by some 500 Israel-haters at SOAS as Israeli ambassador Mark Regev spoke.

Inside the university, security was heightened with specialist police and dogs patrolling the corridors as well as plainclothes security personnel.

Nory, a student, told MailOnline: ‘I support Palestine. I am against the occupation and the oppression. In 2017, a country like Israel should be ashamed. I hope there is not violence here today but if there is, I could maybe understand it.

‘I’m a Malcolm X supporter. I believe that in certain circumstances, violence is justified. A revolution never happened without violence.’

This small section was, to me, chilling:

Ben Paul, 46, a former Jewish Society president, was wearing an Israeli flag around his shoulders.

‘I’ve had a few people bump into me quite hard. I get it, I’m wearing an Israeli flag. But I hope it doesn’t get any worse than that.’

It is the very definition of intimidation to “bump into” people “quite hard.” Imagine that happening to you in any public venue, especially one patrolled by police.

But even worse is Ben Paul’s acceptance of that fact. “I get it.” This means that the idea of publicly supporting Israel on a college campus is expected to be met with physical intimidation.

This anecdote should send chills down the backs of anyone who cares about freedom of expression.

The Israel-hating drones, by the way, were instructed by their leaders not to engage in any discussion about Israel. Haaretz notes:

Organizers handed out leaflets urging demonstrators to keep to a code of conduct: “Don’t talk to cops,” “don’t talk to media,” and “don’t interact with Zionists,” were the main suggestions. “Consider covering your face to shield your identity from haters,” was another.

A modern college campus spawns students who are explicitly against freedom of speech, who are against dialogue and debate, and who are encouraged to hide their very faces to give them freedom to physically harass anyone who disagrees with them.

The most shameful part is that the world does not consider this shameful.