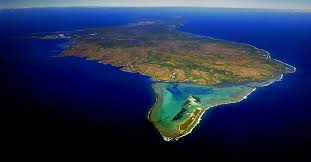 Analogies are never perfect, but they can still be illuminating.

Spain originally colonized the island in the 16th century. The US captured the island in 1898 during the Spanish American War. (There was no battle, the island’s residents had no idea they were at war with the US and surrendered.)

Since then, the US has controlled the island. it remains today an unincorporated territory of the United States, where the residents do not enjoy constitutional protection.

The United Nations includes Guam in its list of Non-Self-Governing Territories, and it has expended efforts to decolonize Guam along with the other remaining colonized lands worldwide.

Among the annual UN demands of the US concerning Guam is:


Called once again upon the administering Power to take into consideration the expressed will of the Chamorro people as supported by Guam voters in the referendum of 1987 and as subsequently provided for in Guam law regarding Chamorro self-determination  efforts, encouraged the administering Power and the territorial Government to enter into negotiations on the matter, and stressed the need for continued close monitoring of the overall situation in the Territory;

Here is how the US responds to the UN demands for self-determination in Guam:

In a letter dated 2 November 2006 addressed to the delegate of American Samoa to the United States House of Representatives, the Assistant Secretary of State for Legislative Affairs elaborated on the position of the Government of the United States. He indicated that the status of the insular areas regarding their political relations with the federal Government was an internal United States issue, and not one that came within the purview of the Special Committee on the Situation with regard to the Implementation of the Declaration on the Granting of Independence to Colonial Countries and Peoples. He also noted that the Special Committee had no authority to alter in any way the relationship between the United States and those territories and had no mandate to engage the United States in negotiations on their status.

In other words, when the UN wants to help the residents of Guam to achieve self-determination, the US tells the UN to go to hell.
No protests, no BDS.. The US can act with impunity towards the residents of Guam and keep the island as a colony despite UN attempts to work towards more independence.
It is instructive to see that even democratic nations tell the UN to drop dead when it is in their interests to do so.
(h/t Irene)