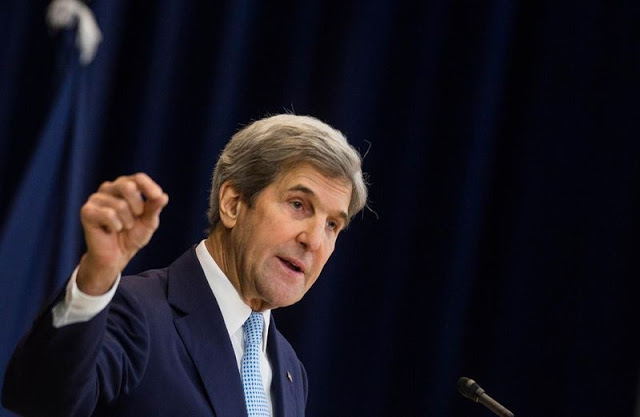 John Kerry’s speech on Wednesday gave Palestinians two more gifts from the US today – rewards for their adamant refusal to compromise.

Kerry said that Israel must do more concrete moves for peace – stopping building, giving more power to the PA – in order to build confidence towards a two state solution. There were no such concrete demands on the Palestinian side, only wishy washy requests to stop incitement and terror – with no consequences if they refuse.

As has been pointed out before, Mahmoud Abbas has bragged on multiple occasions that he has not changed the Palestinian position one bit since 1988.

Since then, the Israeli side has given the Palestinians autonomy, land, and allowed them to arm themselves. It has released scores of murderers and terrorists from prison.

The Palestinians have responded with suicide bombings, stabbings, shootings, rocket fire, more incitement and more overt support of terrorists. Israel has made all the concessions. (Unless you count the Palestinian Authority stopping terror attacks to be a “concession,” which mean you consider Palestinians to be murderers by nature and want to reward them for acting like normal humans.)

And the US has rewarded the intransigent side.

In 2001, the US officially said that the Palestinians should have a state – a wonderful reward for the outbreak of the second intifada.

In 2011, President Obama for the first time said that any peace plan must adhere to the 1967 lines with equal land swaps – a completely new US position, giving Palestinians far more than the Clinton parameters envisioned, and also a reward for Palestinian refusal to counter earlier Israeli offers for peace.

And today, John Kerry gave two major new concessions to the Palestinians as a reward for their refusal to even talk to Israel for years.

This was never officially stated by the US before.

The other major change was that the US changed its characterizations of Jewish communities in Judea and Samaria from being “illegitimate” to now reverting to language from the Carter era that they are “inconsistent with international law.” The very first veto at the UN Security Council by the Obama administration in 2011 was for a resolution that called the settlements illegal, now Kerry says that this is official US policy.

That is two major changes in Obama’s policy towards Israel today, and (at least) three during his administration, all of them in favor of Palestinians who have not even deigned to negotiate with Israel after months of pleading by the US.

When Israel gives concessions for peace, they are not rewarded with goodwill as Kerry pretends is a prerequisite for peace. They are instead punished, while Palestinians reap more and more rewards for doing nothing at all for peace, in fact for creating an environment where their people will support terror for generations to come.

The lesson is clear. Israel must stop being nice, because the nice guys are the ones who are treated by the world as if they have no rights to begin with.

And on Wednesday, John Kerry proved it.