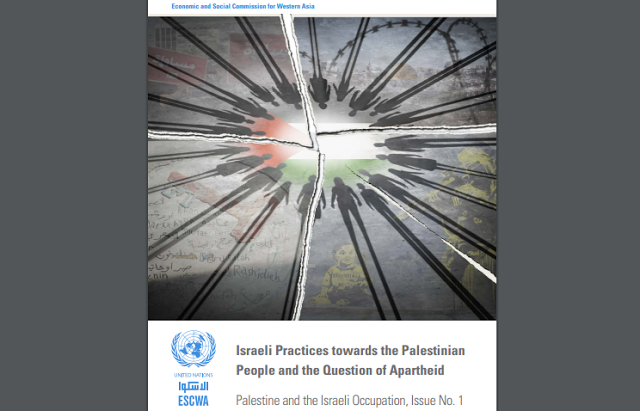 The UN’s Economic and Social Commission for Western Asia (ESCWA) asked Israel-hater Richard Falk to write a report to paint a pseudo-legal face on their accusation that Israel practices apartheid under the definition of the term in international law.

Look at the members of this group:

The 74-page report has one purpose: to give Israel-haters something to point to in order to pretend that their hate is based on logic. Of course, for both Falk and his sponsors, the verdict is written first and the reasoning shoe-horned in later.

Throughout the document one can find things that to the ignorant sound legitimate but which could be burst in seconds. For example:


The question arises as to whether Israel has deliberately pursued fragmentation of
the West Bank into an archipelago of Palestinian cantons, divided by intervening
Jewish-only areas (the Bantustan model). Certainly, this geography will
permanently enfeeble any putative Palestinian sovereignty, preserving the
prerogative of Israel to administer intervening land for the Jewish people. Oslo II,
paradoxically, facilitated this “grand” strategy by establishing borders for the
Palestinian autonomy enclaves. The comparison with South Africa helps to clarify
an essential observation: with Israeli Jewish-national domination over an area
dotted with Palestinian autonomy zones, apartheid is expressed as fully in a
partition strategy as it is in a unified State.

But Israel offered the Palestinians their own state that would be contiguous in the West Bank. Several times! So much for that argument.

Falk makes the argument constantly that Israel, by defining itself as a Jewish state, is inherently discriminatory against its Arab citizens. Yet every Arab state defines itself as such, with no such complaints by Falk.


Objection 1: Consistency with international practice: The Israeli doctrine of maintaining a Jewish majority, enabling the Jewish people to have its own nation-State, is consistent with the behaviour of States around the world, such as France, which express the self-determination of their respective ethnic nations. It is therefore unfair and exceptional treatment — and implicitly anti-Semitic — to target Israel as an apartheid State when it is only doing the same.

Falk:This common argument derives from miscasting how national identities function in modern nation States. In France, for example, anyone holding French citizenship, regardless of whether they are indigenous or of immigrant origin, are equal members of the French nation and enjoy equal rights. According to the Supreme Court, Israel is not the State of the “Israeli nation” but of the “Jewish nation”.86 Collective rights in Israeli law are explicitly conferred on Jews as a people and on no other collective identity: national rights for Jews, embedded in such laws as the Law of Return and the Citizenship Law (discussed above) do not extend to any other group under Israeli rule. Hence, racial-nationalist privileges are embedded in the legal and doctrinal foundations of the State. That is exceptional and would meet with opprobrium in any other country (as it did in apartheid South Africa)

Germany’s naturalization law includes “A foreigner who is ordinarily resident abroad may be naturalized… if ties with Germany exist which justify naturalization.”

This doesn’t extend to people who do not have any ties with Germany. So, by Falk’s definition, Germany’s law that gives preference for people of German heritage to become citizens even if they are not residents is apartheid, and should meet with opprobrium.

Objection 2. The standing of Palestinians as foreigners: Palestinian residents of the occupied Palestinian territory are not citizens of the State and so the State does not owe them rights and treatment equal to that accorded to Israeli Jewish citizens and settlers.

The entire tedious report is filled with examples like these. And, yes, it is antiemitic, because the fundamental premise behind Falk’s thesis is that Jews have no right to self determination.

If anyone ever takes it seriously it wouldn’t be difficult to write up a formal rebuttal of every one of Falk’s points, but it is doubtful that anyone outside hardcore Israel haters will take it seriously to begin with.