Since 30 March 2018, the Gaza Strip has witnessed a significant increase in Palestinian casualties in the context of mass demonstrations taking place along Israel’s perimeter fence with Gaza. The demonstrations have occurred as part of the ‘Great March of Return’, a series of mass protests, expected to continue up to 15 May. The large number of casualties among unarmed Palestinian demonstrators, including a high percentage of demonstrators hit by live ammunition, has raised concerns about excessive use of force. Gaza’s health sector is struggling to cope with the mass influx of casualties, due to years of blockade, internal divide and a chronic energy crisis, which have left essential services in Gaza barely able to function.

And they made infographics so that their statistics can be easily shared on social media: 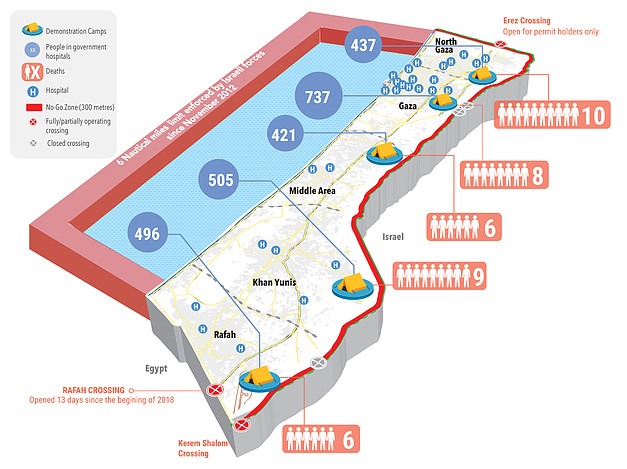 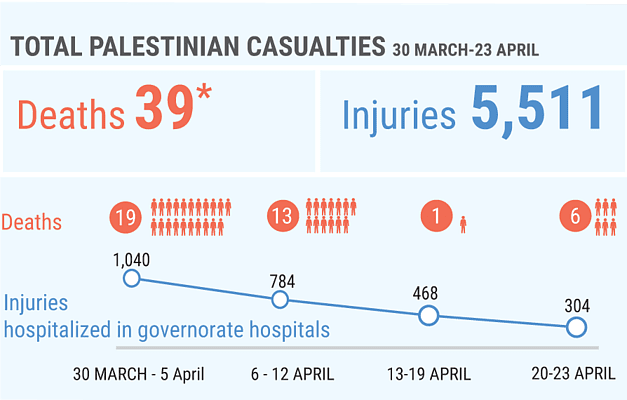 If the UN officially releases these graphics with specific numbers, then they must be true, right?  It isn’t as if the UN would mindlessly repeat the statistics handed to them by a terrorist organization, right?
Well, that’s exactly what the UN did.
On the bottom of the press release, they admit:

Source of casualties data: Palestinian Ministry of Health in Gaza
Disclaimer: Data and analysis provided in this snapshot is based on preliminary information available. Further assessments are pending.

The Palestinian Ministry of Health in Gaza is Hamas.
Yet the graphics created by the UN include no such caveats! They are being spread, and since they have the UN as the source, people will believe them uncritically.
There is evidence that Hamas is inflating the casualty figures, especially the number of people shot. No one can do an independent investigation in Gaza so Hamas has the monopoly on casualty information. The UN is following Hamas’ rules on how to report casualties.
The media up until now would generally mention that their figures came from the “Ministry of Health” and could claim that they informed their readers of the source, not mentioning Hamas. But now they can say that these are official UN figures, which give them far more authority. Haaretz has an entire article about these UN figures as if the story is anything new. Only deep into the article does it mention that the UN’s source is Hamas’ Health Ministry.
During Operation Protective Edge, the UN also republished spurious data on how many civilians were killed.  Hamas instructed Gazans to identify all the dead as civilians, and the UN’s sources followed Hamas instructions. Even a year later, it ignored evidence proving how many of the supposed “civilians” were really terrorists.
The UN doesn’t care about the truth any more than Hamas does. Any journalist who repeats UN figures as authoritative is not doing his or her job.