This tweet from last September from a German journalist says it all: 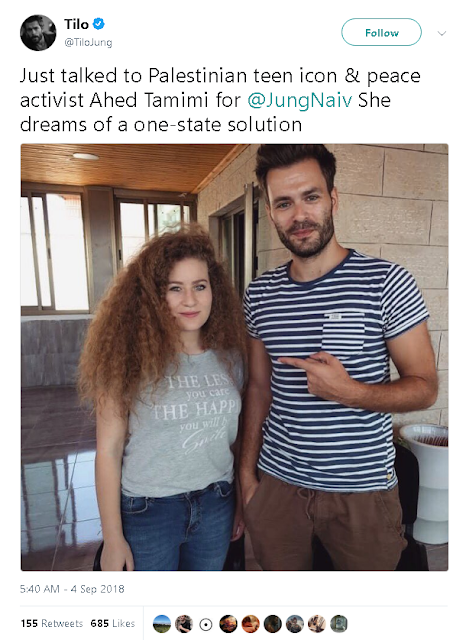 But just in case you are deluded and think that the Tamimis are dreaming of a one state where Jews have equal rights, here comes her aunt Najiah saying that there will be no peace until Palestine takes over all of Israel:

Not that the land will be shared between Arabs and Jews – but it is only Arab land.

That is the “peace” that the world is pushing when it publishes puff pieces on the Tamimis, like this piece by France24 yesterday and another by Financial Times.

By calling any Palestinian who does not directly call for suicide bombings “peaceful,” the liberal world press is guilty of racism against Palestinians by giving them such a low bar to clear to be praised. It’s like praising a pit bull for not tearing out anyone’s throat.

Zionists aren’t the ones who are dehumanizing Palestinians; it is the world that expects them to be violent and is pleasantly surprised when some of them pretend not to support bombing pizza shops – even though they still support the people who do.