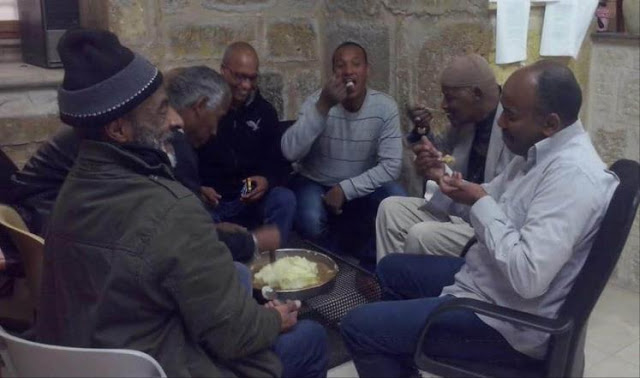 Every once in a while there are articles about the small community of Palestinians who came from Africa.

These articles contradict each other, and sometimes themselves, as to the history of this community.

This Al Jazeera article says that the first set of Africans settled in Palestine in the late 19th and early 20th centuries from Sudan, Senegal, Nigeria and Chad.  But then it says that they arrived in 1829 with the army of Ibrahim Pasha, and some who were part of the British army at that time and who deserted to join the Muslims in jihad.

This other article says that the Mufti of Jerusalem asked the Africans to guard Al Aqsa mosque in the 1920s. “For a long time, most of the people working at Al-Aqsa Mosque were from the African community and they were religious militants,” a member of he community says, claiming that they had to be relieved of duty for a day to allow a Belgian official to visit the Temple Mount since they would never allow non-Muslims to ascend. Then the second wave of these African Muslims came to Jerusalem with the Egyptian army in 1948 and stayed in Jerusalem. Given that the Egyptian army never made it to Jerusalem, this claim is also questionable.

Official Palestinian site Wafa goes further, saying that early African Muslims would visit Jerusalem after their Hajj to Saudi Arabia and some stayed. But then it claims that some of them came to Jerusalem with Umar in the seventh century!

Al Monitor recently discussed this topic, and it says:


Jerusalem’s African community is relatively small and consists of nearly 50 families living in the Bab al-Majlis neighborhood of the Old City. The majority of the community comes from countries such as Chad, Nigeria, Senegal and Sudan. Their ancestors came to Jerusalem in successive periods, beginning in the Ottoman era and continuing into the British Mandate.
Moussa Qaws, a co-founder of the African Community Society in Bab al-Majlis, told Al-Monitor that Africans “immigrated to Palestine for two main reasons: the first is religious and consists of the hajj [to Al-Aqsa Mosque, which often follows the pilgrimage to Mecca]. In fact, Africans who used to make the pilgrimage to Jerusalem were rewarded a privileged social status. The second reason is jihad and the [religious] bond [formed] in Jerusalem.”

This part is interesting:


When Jordan controlled East Jerusalem, from 1948-1967, the Jordanian government did not grant citizenship to Africans. Following the Israeli occupation of Jerusalem in 1967, Africans who lived in Jerusalem obtained identity cards.

If they only came in 1948, Jordan’s decision makes sense and they have only been in the region for a short period of time. If they came before that, the Jordanian government showed that they are racists.

One other part of the discussion may or may not be relevant. Today, these black Palestinians mostly live in an area called “The slaves prison” near the Temple Mount, an area that had been named that since Mamluk times.

Could some of them have come to Palestine as slaves and now they are re-writing their history?