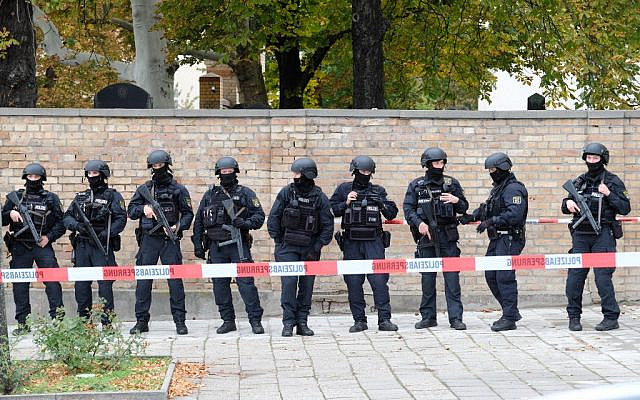 In the Times of Israel account of the first person shooter video made by the neo-Nazi murderer Stephan Balliet, he is described as being discouraged by a heavily bolted front door of the synagogue, and then his repeated attempts to blow open a side door with explosives and gunfire are not successful.


Max Privorozki, head of the Jewish community in the city, which traces its roots to the 10th century, said the temple’s security system had stopped what could have been a bloodbath.

…Privorozki told news website Spiegel Online that the gunman fired several shots at the door and threw numerous “Molotov cocktails, fireworks or grenades to get inside.”

“But the door remained closed, God protected us. The whole thing took five to 10 minutes.”

Privorozki said they swung into action with astonishing bravery to protect themselves.

“We barricaded our doors from inside and waited for the police,” he told Stuttgarter Zeitung.

“And then we carried on with our service.”

If Balliet had managed to breach the door, it would have been a massacre. He killed the other two people out of frustration of not being able to hit his intended targets.

People are reacting that Europe needs to do more about antisemitism, but the “world’s oldest hatred” isn’t going to be eliminated any time soon. If anything, the media coverage of attacks like these make the next ones more likely.

Of course an attack on a synagogue is front page news, and it should be, even though the intended attack was foiled.

The Jews of Europe have known for decades that they are targets, from both Muslims and from the extreme Right. Their synagogues have been fortresses for a while.

That planning paid off on Wednesday.

US synagogues have been going in that direction as well especially since Pittsburgh. Homeland Security funds have been put into synagogue protection. It is sad but necessary. Because antisemitism is not going away – it changes form but never disappears.

For the people actually living as Jews outside Israel, all we can do is to take precautions commensurate with the threats. We can encourage local police to keep an eye on things and encourage the congregations to create an active shooter (and bombing) plan.

Halle was a tragedy, but it could have been far worse. Security precautions prevented a bloodbath, And for that we should all be thankful.